Weird n' Wild Creatures Wiki
Register
Don't have an account?
Sign In
Advertisement
in: Monsters of the Past, Dinosaurs, Carnosaurs,
and 19 more 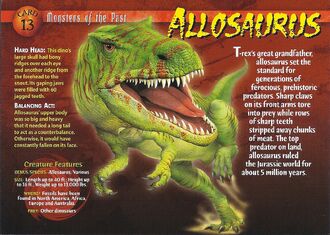 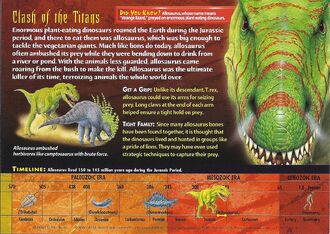 Fossils have been found in North America, Africa, Europe and Australia.

Hard Head: This dino's large skull had bony ridges over each eye and another ridge from the forehead to the snout. Its gaping jaws were filled with 60 jagged teeth.

Balancing Act: Allosaurus' upper body was so big and heavy that it needed a long tail to act as a counterbalance. Otherwise, it would have constantly fallen on its face.

Clash of the Titans

Enormous plant-eating dinosaurs roamed the Earth during the Jurassic period, and there to eat them was allosaurus, which was big enough to tackle the vegetarian giants. Much like lions do today, allosaurus often ambushed its prey while they were bending down to drink from a river or pond. With the animals less guarded, allosaurus came roaring from the bush to make the kill. Allosaurus was the ultimate killer of its time, terrorizing animals the whole world over.

Get a Grip: Unlike its descendant, T.rex, allosaurus could use its arms for seizing prey. Long claws at the end of each arm helped ensure a tight hold on prey.

Tight Family: Since many allosaurus bones have been found together, it is thought that the dinosaurs lived and hunted in groups like a pride of lions. They may have even used strategic techniques to capture their prey.

Allosaurus lived 150 to 145 million years ago during the Jurassic Period.

One look at this monster's jaws and claws say enough - no other beasts wanted to be around when allosaurus got hungry and looked to put its huge, sharp teeth to use.

Allosaurus fed on dinosaurs up to six times its own size.
Community content is available under CC-BY-SA unless otherwise noted.
Advertisement