Weird n' Wild Creatures Wiki
Register
Don't have an account?
Sign In
Advertisement
in: Monsters of the Past, Dinosaurs, Sauropods,
and 8 more 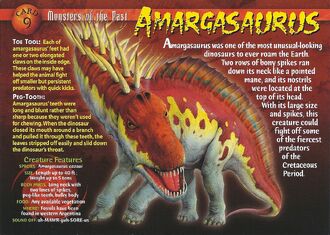 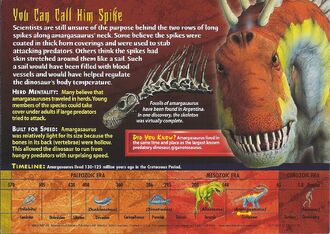 Fossils have been found in western Argentina

Amargasaurus lived in the same time and place as the largest known predatory dinosaur, giganotosaurus.
Amargasaurus was one of the most unusual-looking dinosaurs to ever roam the Earth. Two rows of bony spikes ran down its neck like a pointed mane, and its nostrils were located at the top of its head. With its large size and spikes, this creature could fight off some of the fiercest predators of the Cretaceous Period

Toe Tool: Each of amargasaurus' feet had one or two elongated claws on the inside edge. These claws may have helped the animal fight off smaller but persistent predators with quick kicks.

Peg-Tooth: Amargasaurus' teeth were long and blunt rather than sharp because they weren't used for chewing. When the dinosaur closed its mouth around a branch and pulled it through these teeth, the leaves stripped off easily and slid down the dinosaur's throat.

You Can Call Him Spike

Scientists are still unsure of the purpose behind the two rows of long spikes along amargasaurus' neck. Some believe the spikes were coated in thick horn coverings and were used to stab attacking predators. Others think the spikes had skin stretched around them like a sail. Such a sail would have been filled with blood vessels and would have helped regulate the dinosaur's body temperature.

Herd Mentality: Many believe that amargasauruses traveled in herds. Young members of the species could take cover under adults if large predators tried to attack.

Built for Speed: Amargasaurus was relatively light for its size because the bones in its back (vertebrae) were hollow. This allowed the dinosaur to run from hungry predators with surprising speed.

Amargasaurus lived 130 - 125 million years ago in the Cretaceous Period.

Two ridges of spiked armor kept this plant-eating dinosaur safe from vicious attacks. Any predator that tried to take a bite out of amargasaurus' neck risked suffering a fatal wound.

Amargasaurus' skin color may have helped camouflage the creature.
Community content is available under CC-BY-SA unless otherwise noted.
Advertisement