Weird n' Wild Creatures Wiki
Register
Don't have an account?
Sign In
Advertisement
in: Monsters of the Past, Dinosaurs, Sauropods,
and 12 more 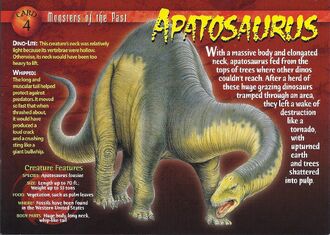 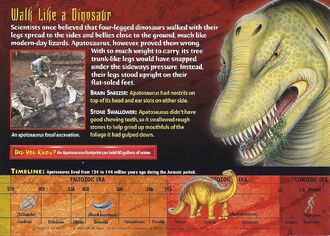 Fossils have been found in the Western United States

Vegetation, such as palm leaves

An Apatosaurus footprint can hold 80 gallons of water.

With a massive body and elongated neck, apatosaurus fed from the tops of trees where other dinos couldn't reach. After a herd of these huge grazing dinosaurs tramped through an area, they left a wake of destruction like a tornado, with upturned earth and trees shattered into pulp.

Dino-Lite: This creature's neck was relatively light because its vertebrae were hollow. Otherwise, its neck would have been too heavy to lift.

Whipped: The long and muscular tail helped protect against predators. It moved so fast that when it thrashed about, it would have produced a loud crack and a crushing sting like a giant bullwhip.

Scientists once believed that four-legged dinosaurs walked with their legs spread to the sides and bellies close to the ground, much like modern-day lizards. Apatosaurus, however, proved them wrong. With so much weight to carry, its tree trunk-like legs would have snapped under the sideways pressure. Instead, their legs stood upright on their flat-soled feet.

Brain Sneezer: Apatosaurus had nostrils on top of its head and ear slots on either side.

Stone Swallower: Apatosaurus didn't have good chewing teeth, so it swallowed rough stones to help grind up mouthfuls of the foliage it had gulped down.

Apatosaurus lived from 154 to 144 million years ago during the Jurassic period.

Apatosaurus was a giant of a dinosaur. Only the biggest predators could have bested this beast. This reptile could use its long, thin tail like a whip.

This dino has been called the "thunder lizard."

+1 Defense against Monsters of the Past