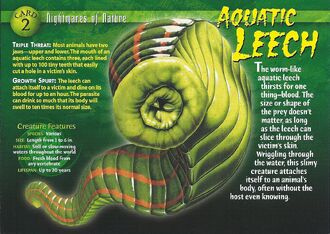 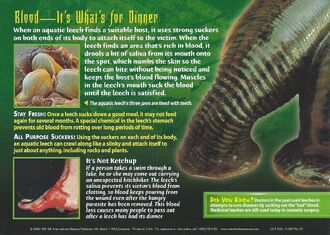 Still or slow-moving waters throughout the world

Fresh blood from any vertebrate

Doctors in the past used leeches in attempts to cure diseases by sucking out the "bad" blood. Medicinal leeches are still used today in cosmetic surgery.

The worm-like aquatic leech thirsts for one thing - blood. The size or shape of the prey doesn't matter, as long as the leech can slice through the victim's skin. Wriggling through the water, this slimy creature attaches itself to an animal's body, often without the host even knowing.

Triple Threat: Most animals have two jaws - upper and lower. The mouth of an aquatic leech contains three, each lined with up to 100 tiny teeth that easily cut a hole in a victim's skin.

Growth Spurt: The leech can attach itself to a victim and dine on its blood for up to an hour. The parasite can drink so much that its body will swell to ten times its normal size.

Blood - It's What for Dinner

When an aquatic leech finds a suitable host, it uses strong suckers on both ends of its body to attach itself to the victim. When the leech finds an area that's rich in blood, it drools a bit of saliva from its mouth onto the spot, which numbs the skin so the leech can bite without being noticed and keeps the host's blood flowing. Muscles in the leech's mouth suck the blood until the leech is satisfied.

Stay Fresh: Once a leech sucks down a good meal, it may not feed again for several months. A special chemical in the leech's stomach prevents old blood from rotting over long periods of time.

All Purpose Suckers: Using the suckers on each end of its body, an aquatic leech can crawl along like a slinky and attach itself to just about anything, including rocks and plants.

If a person takes a swim through a lake, he or she may come out carrying an unexpected hitchhiker. The leech's saliva prevents its victim's blood from clotting, so blood keeps pouring from the wound even after the hungry parasite has been removed. This blood loss causes many people to pass out after a leech has had its dinner.

The aquatic leech is a parasite that feeds on the blood of its victims. Like a vampire, it bites into hosts with sharp teeth and drinks until it swells up.

Leeches can feed for up to 40 minutes at a time.

+1 attack against Monsters of the Deep
Community content is available under CC-BY-SA unless otherwise noted.
Advertisement