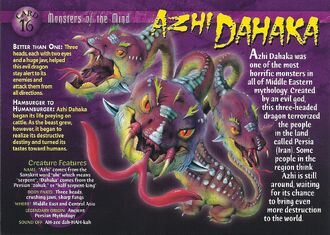 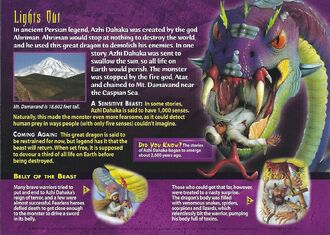 The stories of Azhi Dahaka began to emerge about 2,600 years ago.

Azhi Dahaka was one of the most horrific monsters in all of Middle Eastern mythology. Created by an evil god, this three-headed dragon terrorized the people in the land called Persia (Iran). Some people in the region think the Azhi is still around, waiting for its chance to bring even more destruction to the world.

Better Than One: Three heads, each with two eyes and a huge jaw, helped this evil dragon stay alert to its enemies and attack them from all directions.

Hamburger to Humanburger: Azhi Dahaka began its life preying on cattle. As the beast grew, however, it began to realize its destructive destiny and turned its tastes toward humans.

In ancient Persian legend, Azhi Dahaka was created by the god Ahriman. Ahriman would stop at nothing to destroy the world, and he used this great dragon to demolish his enemies. In one story, Azhi Dahaka was sent to swallow the sun, so all life on Earth would perish. The monster was stopped by the fire god, Atar, and chained to Mt. Damavand near the Caspian Sea.

A Sensitive Beast: In some stories, Azhi Dahaka is said to have 1,000 senses. Naturally, this made the monster even more fearsome, as it could detect human prey in ways people (with only five senses) couldn’t imagine.

Coming Again: This great dragon is said to be restrained for now, but legend has it that the beast will return. When set free, it is supposed to devour a third of all life on Earth before being destroyed. 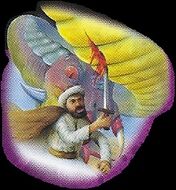 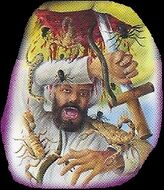 Azi Dahaka’s three heads can see enemies coming from all directions. This dragon smells its human prey from great distances with its snake-like forked tongue. Its three heads and huge fangs take care of the rest.