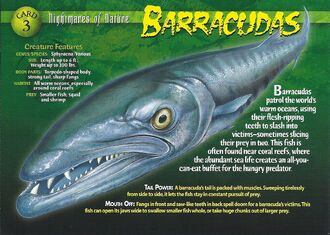 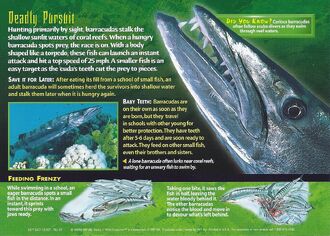 Curious barracudas often follow scuba divers as they swim through reef waters.
Barracudas patrol the world’s warm oceans, using their flesh-ripping teeth to slash victims - sometimes slicing their prey in two. This fish is often found near coral reefs, where the abundant sea life creates an all-you-can-eat buffet for the hungry predator.

Tail Power: A barracuda’s tail is packed with muscles. Sweeping tirelessly from side to side, it lets the fish stay in constant pursuit of prey.

Mouth Off: Fangs in front and saw-like teeth in back spell doom for a barracuda’s victims. This fish can open its jaws wide to swallow smaller fish whole, or take huge chunks out of larger prey.

Hunting primarily by sight, barracudas stalk the shallow sunlit waters of coral reefs. When a hungry barracuda spots prey, the race is on. With a body shaped like a torpedo, these fish can launch an instant attack and hit a top speed of 25 mph. A smaller fish is an easy target as the ‘cuda’s teeth cut the prey to pieces.

Save it for Later: After eating its fill from a school of small fish, an adult barracuda will sometimes herd the survivors into shallow water and stalk them later when it is hungry again.

Baby Teeth: Barracudas are on their own as soon as they are born, but they travel in schools with other young for better protection. They have teeth after 5-6 days and are soon ready to attack. They feed on other small fish, even their brothers and sisters. 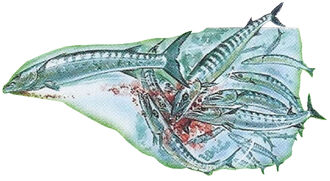