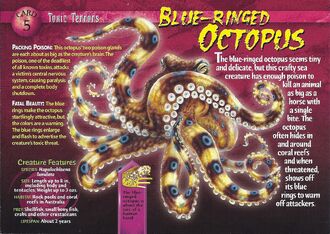 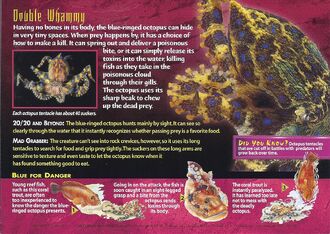 Length up to 8 in., including body and tentacles; Weight up to 3 ozs.

Octopus tentacles that are cut off in battles with predators will grow back over time.

The blue-ringed octopus seems tiny and delicate, but this crafty sea creature has enough poison to kill an animal as big as a horse with a single bite. The octopus often hides in and around coral reefs and when threatened, shows off its blue rings to warn off attackers.

Packing Poison: This octopus’ two poison glands are each about as big as the creature’s brain. The poison, one of the deadliest of all known toxins, attacks a victim’s central nervous system, causing paralysis and a complete body shutdown.

Fatal Beauty: The blue rings make the octopus startlingly attractive, but the colors are a warning. The blue rings enlarge and flash to advertise the creature’s toxic threat.

Having no bones in its body, the blue-ringed octopus can hide in very tiny spaces. When prey happens by, it has a choice of how to make a kill. It can spring out and deliver a poisonous bite, or it can simply release its toxins into the water, killing fish as they take in the poisonous cloud through their gills. The octopus uses its sharp break to chew up the dead prey.

20/20 and Beyond: The blue-ringed octopus hunts mainly by sight. It can see so clearly through the water that it instantly recognizes whether passing prey is a favorite food.

Mad Grabber: The creature can’t see into rock crevices, however, so it uses its long tentacles to search for food and grip prey tightly. The suckers on these long arms are sensitive to texture and even taste to let the octopus know when it has found something good to eat. 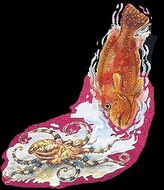 The tiny blue-ringed octopus can kill creatures ten times its size. Its beautiful appearance is a warning that the animal is poisonous.

There is no antidote for the blue-ringed octopus’ poison.