Weird n' Wild Creatures Wiki
Register
Don't have an account?
Sign In
Advertisement
in: Monsters of the Deep, Sharks, Fish,
and 12 more 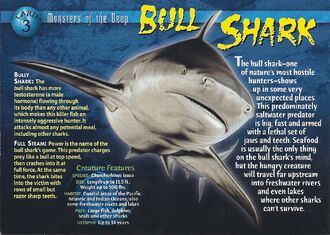 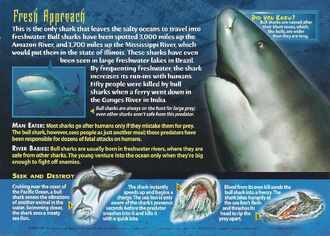 Coastal areas of the Pacific, Atlantic and Indian Oceans; also some freshwater rivers and lakes

Bull sharks are named after their blunt noses, which, like bulls, are wider than they are long.

The bull shark - one of nature’s most hostile hunters - shows up in some very unexpected places. This predominately (sic) saltwater predator is big, fast and armed with a lethal set of jaws and teeth. Seafood is usually the only thing on the bull shark’s mind, but the hungry creature will travel far upstream into freshwater rivers and even lakes where other sharks can’t survive.

Bully Shark: The bull shark has more testosterone (a male hormone) flowing through its body than any other animal, which makes this killer fish an intensely aggressive hunter. It attacks almost any potential meal, including other sharks.

Full Steam: Power is the name of the bull shark’s game. This predator charges prey like a bull at top speed, then crashes into it at full force. At the same time, the shark bites into the victim with rows of small but razor sharp teeth.

This is the only shark that leaves the salty oceans to travel into freshwater. Bull sharks have been spotted 3,000 miles up the Amazon River, and 1,700 miles up the Mississippi River, which would put them in the state of Illinois. These sharks have even been seen in large freshwater lakes in Brazil. By frequenting freshwater, the shark increases its run-ins with humans. Fifty people were killed by bull sharks when a ferry went down in the Ganges River in India.

Man Eater: Most sharks go after humans only if they mistake them for prey. The bull shark, however, sees people as just another meal; these predators have been responsible for dozens of fatal attacks on humans.

River Babies: Bull sharks are usually born in freshwater rivers, where they are safe from other sharks. The young venture into the ocean only when they’re big enough to fight off enemies. 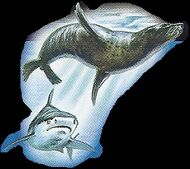 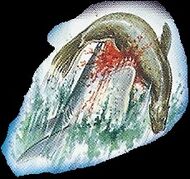 This powerful shark charges like a bull when it spots prey in its underwater domain. A strong swimmer with a bulky body, the bull shark is a feared killer that will attack almost anything, including humans.