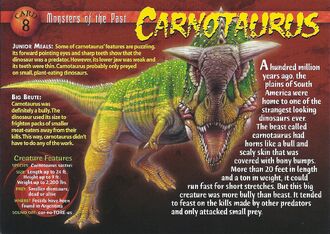 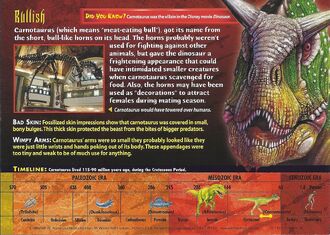 Fossils have been found in Argentina

Carnotaurus was the villain in the Disney movie Dinosaur.
A hundred million years ago, the plains of South America were home to one of the strangest looking dinosaurs ever. The beast called carnotaurus had horns like a bull and scaly skin that was covered with bony bumps. More than 20 feet in length and a ton in weight, it could run fast for short stretches. But this big creature was more bully than beast. It tended to feast on the kills made by other dinosaurs and only attacked small prey.

Junior Meals: Some of carnotaurus' features are puzzling. Its forward pointing eyes and sharp teeth show that the dinosaur was a predator. However, its lower jaw was weak and its teeth were thin. Carnotaurus probably only preyed on small, plant-eating dinosaurs.

Big Brute: Carnotaurus was definitely a bully. The dinosaur used its size to frighten packs of smaller meat-eaters away from their kills. This way, carnotaurus didn't have to do any of the work.

Carnotaurus (which means "flesh-eating bull"), got its name from the short, bull-like horns on its head. The horns probably weren't used for fighting against other animals, but gave the dinosaur a frightening appearance that could have intimidated smaller creatures when carnotaurus scavenged for food. Also, the horns may have been used as "decorations" to attract females during mating season.

Bad Skin: Fossilized skin impressions show that carnotaurus was covered in small, bony bulges. This thick skin protected the beast from the bites of bigger predators.

Wimpy Arms: Carnotaurus' arms were so small they probably looked like they were just little wrists and hands poking out of its body. These appendages were too tiny and weak to be of much use for anything.

Carnotaurus lived 115 - 90 million years ago, during the Cretaceous Period.

Carnotaurus was a massive meat-eater that preyed on small dinos during the Cretaceous Period. Its jaws were weak compared to other carnivores, but sharp claws on its feet were powerful weapons.

This was one of the only predators to have horns.
Community content is available under CC-BY-SA unless otherwise noted.
Advertisement