Weird n' Wild Creatures Wiki
Register
Don't have an account?
Sign In
Advertisement
in: Monsters of the Mind, Greek mythology, Canids,
and 5 more 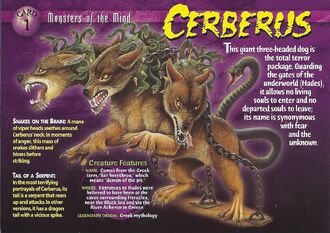 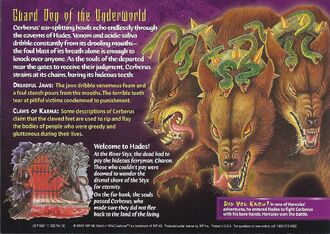 Comes from the Greek term, "ker berethrou", which means "demon of the pit."

Entrances to Hades were believed to have been at the caves surrounding Heraclea, near the Black Sea and via the River Acheron in Greece.

In one of Hercules' adventures, he entered Hades to fight Cerberus with his bare hands. Hercules won the battle.

This giant three-headed dog is the total terror package. Guarding the gates of the underworld (Hades), it allows no living souls to enter and no departed souls to leave; its name is synonymous with fear and the unknown.

Snakes on the Brain: A mane of viper heads seethes around Cerberus' neck. In moments of anger, this mass of snakes slithers and hisses before striking.

Tail of a Serpent: In the most terrifying portrayals of Cerberus, its tail is a serpent that rears up and attacks. In other versions, it has a dragon tail with a vicious spike.

Cerberus' ear-splitting howls echo endlessly through the caverns of Hades. Venom and acidic saliva dribble constantly from its drooling mouths - the foul blast of its breath alone is enough to knock over anyone. As the souls of the departed near the gates to receive their judgement, Cerberus strains at its chains, baring its hideous teeth.

Dreadful Jaws: The jaws dribble venomous foam and a foul stench pours from the mouths. The terrible teeth tear at pitiful victims condemned to punishment.

Claws of Karma: Some descriptions of Cerberus claim that the clawed feet are used to rip and flay the bodies of people who were greedy and gluttonous during their lives.

At the River Styx, the dead had to pay the hideous ferryman, Charon. Those who couldn't pay were doomed to wander the dismal shore of the Styx for eternity. On the far bank, the souls passed Cerberus, who made sure they did not flee back to the land of the living.

Cerberus was as fierce as a monster could be. Along with its three snapping jaws, it also had a serpent for a tail. Its mane of snakes let the beast see in all directions.

There are two ways to calm down the Cerberus: playing music or giving it cake laced with sleeping medicine.
Community content is available under CC-BY-SA unless otherwise noted.
Advertisement