Weird n' Wild Creatures Wiki
Register
Don't have an account?
Sign In
Advertisement
in: Monsters of the Deep, Fish, Carnivores,
and 3 more 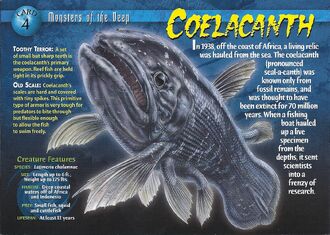 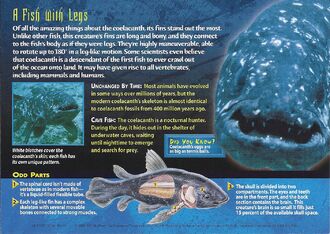 Deep coastal waters off of Africa and Indonesia

Coelacanth’s eggs are as big as tennis balls.

In 1938, off the coast of Africa, a living relic was hauled from the sea. The coelacanth (pronounced seal-a-canth) was known only from fossil remains, and was thought to have been extinct for 70 million years. When a fishing boat hauled up a live specimen from the depths, it sent scientists into a frenzy of research.

Toothy Terror: A set of small but sharp teeth is the coelacanth’s primary weapon. Reef fish are held tight in its prickly grip.

Old Scale: Coelacanth’s scales are hard and covered with tiny spikes. This primitive type of armor is very tough for predators to bite through but flexible enough to allow the fish to swim freely.

A Fish with Legs

Of all the amazing things about the coelacanth, its fins stand out the most. Unlike other fish, this creature’s fins are long and bony, and they connect to the fish’s body as if they were legs. They’re highly maneuverable, able to rotate up to 180° in a leg-like motion. Some scientists even believe the coelacanth is a descendant of the first fish to ever crawl out of the ocean onto land. It may have given rise to all vertebrates, including mammals and humans.

Unchanged by Time: Most animals have evolved in some ways over millions of years, but the modern coelacanth’s skeleton is almost identical to coelacanth fossils from 400 million years ago.

Cave Fish: The coelacanth is a nocturnal hunter. During the day, it hides out in the shelter of underwater caves, waiting until nighttime to emerge and search for prey. 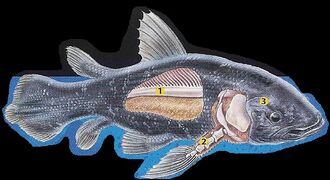