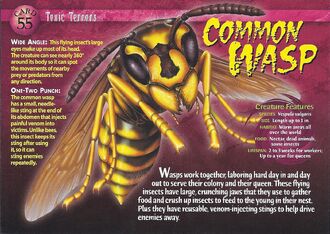 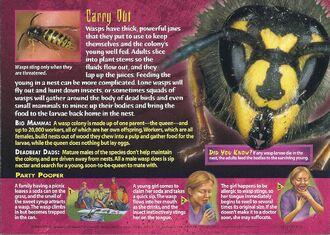 Warm areas all over the world

2 to 3 weeks for workers; Up to a year for some queens

If any wasp larvae die in the nest, the adults feed the bodies to surviving young.
Wasps work together, laboring hard day in and day out to serve their colony and their queen. These flying insects have large, crunching jaws that they use to gather food and crush up insects to feed to the young in their nest. Plus they have reusable, venom-injecting stings to help drive enemies away.

Wide Angle: This flying insect's large eyes make up most of its head. The creature can see nearly 360° around its body so it can spot the movements of nearby prey or predators from any direction.

One-Two Punch: The common wasp has a small, needle-like sting at the end of its abdomen that injects painful venom into victims. Unlike bees, this insect keeps its sting after using it, so it can sting enemies repeatedly.

Wasps have thick, powerful jaws that they put to use to keep themselves and the colony's young well fed. Adults slice into plant stems so the fluids flow out, and they lap up the juices. Feeding the young in a nest can be more complicated. Lone wasps will fly out and hunt down insects, or sometimes squads of wasps will gather around the body of dead birds and even small mammals to mince up their bodies and bring the food to the larvae back home in the nest.

Big Mamma: A wasp colony is made up of one parent - the queen - and up to 20,000 workers, all of which are her offspring. Workers, which are all females, build nests out of wood they chew into a pulp and gather food for the larvae, while the queen does nothing but lay eggs.

Deadbeat Dads: Mature males of the species don't help maintain the colony, and are driven away from the nests. All a male wasp does is sip nectar and search for a young, soon-to-be-queen to mate with.