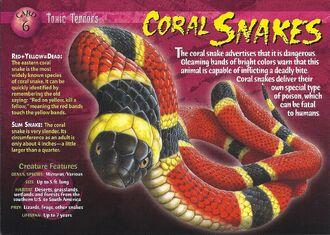 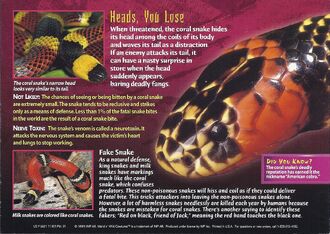 Deserts, grasslands, wetlands, and forests from the southern U.S. to South America

The coral snake’s deadly reputation has earned it the nickname “American cobra.”

The coral snake advertises that it is dangerous. Gleaming bands of bright colors warn that this animal is capable of inflicting a deadly bite. Coral snakes deliver their own special type of poison, which can be fatal to humans.

Red+Yellow=Dead: The eastern coral snake is the most widely known species of coral snake. It can be quickly identified by remembering the old saying: “Red on yellow, kill a fellow,” meaning the red bands touch the yellow bands.

Slim Snake: The coral snake is very slender. Its circumference as an adult is only about 4 inches - a little larger than a quarter.

When threatened, the coral snake hides its head among the coils of its body and waves its tail as a distraction. If an enemy attacks its tail, it can have a nasty surprise in store when the head suddenly appears, baring deadly fangs.

Not Likely: The chances of seeing or being bitten by a coral snake are extremely small. The snake tends to be reclusive and strikes only as a means of defense. Less than 1% of the fatal snake bites in the world are the result of a coral snake bite.

Nerve Toxin: The snake’s venom is called a neurotoxin. It attacks the nervous system and causes the victim’s heart and lungs to stop working.

As a natural defense, king snakes and milk snakes have markings much like the coral snake, which confuses predators. These non-poisonous snakes will hiss and coil as if they could deliver a fatal bite. This tricks attackers into leaving the non-poisonous snakes alone. However, a lot of harmless snakes needlessly are killed each year by humans because the snakes are mistaken for coral snakes. There’s another saying to identify these fakers; “Red on black, friend of Jack,” meaning the red band touches the black one.

One of the deadliest snakes in the world, the coral snake’s bright coloring warns away predators and people alike. Its highly toxic poison makes any encounter dangerous, but it usually will avoid a confrontation.

The largest coral snake on record reached a length of 5 ft.