Weird n' Wild Creatures Wiki
Register
Don't have an account?
Sign In
Advertisement
in: Monsters of the Past, Synapsids, Asia,
and 8 more 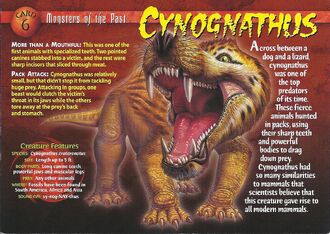 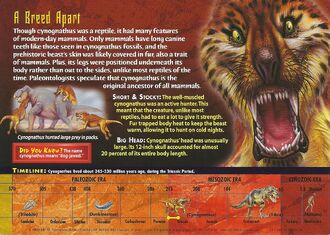 Fossils have been found in South America, Africa and Asia

The name cynognathus means "dog-jawed."
A cross between a dog and a lizard, cynognathus was one of the top predators of its time. These fierce animals hunted in packs, using their sharp teeth and powerful bodies to drag down prey. Cynognathus had so many similarities to mammals that scientists believe that this creature gave rise to all modern mammals.

More than a Mouthful: This was one of the first animals with specialized teeth. Two pointed canines stabbed into a victim, and the rest were sharp incisors that sliced through meat.

Pack Attack: Cynognathus was relatively small, but that didn't stop it from tackling huge prey. Attacking in groups, one beast would clutch the victim's throat in its jaws while the others tore away at the prey's back and stomach.

Though cynognathus was a reptile, it had many features of modern-day mammals. Only mammals have long canine teeth like those seen in cynognathus fossils, and the prehistoric beast's skin was likely covered in fur, also a trait of mammals. Plus, its legs were positioned underneath its body rather than out to the sides, unlike most reptiles of the time. Paleontologists speculate that cynognathus is the original ancestor of all mammals.

Short & Stocky: The well-muscled cynognathus was an active hunter. This meant that the creature, unlike most reptiles, had to eat a lot to give it strength. Fur trapped body heat to keep the beast warm, allowing it to hunt on cold nights.

Cynognathus lived about 245-230 million years ago, during the Triassic Period.

This dog sized, furry reptile roamed before the time of the dinosaurs. Mammal-like canine teeth gave this animal a deadly bite - and it might have worked with others of its kind to bring down larger plant-eating reptiles.