Weird n' Wild Creatures Wiki
Register
Don't have an account?
Sign In
Advertisement
in: Monsters of the Past, Fish, North America,
and 20 more 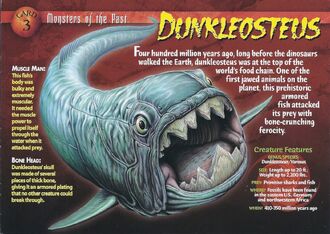 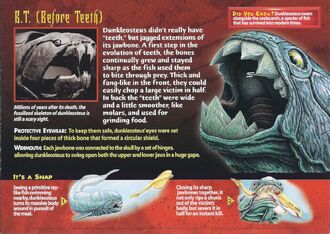 Fossils have been found in the eastern U.S., Germany, and northwestern Africa.

Dunkleosteus swam alongside the coelacanth, a species of fish that has survived into modern times.

Four hundred million years ago, long before the dinosaurs walked the Earth, dunkleosteus was at the top of the world's food chain. One of the first jawed animals on the planet, this prehistoric armored fish attacked its prey with bone-crunching ferocity.

Muscle Man: This fish's body was bulky and extremely muscular. It needed the muscle power to propel itself through the water when it attacked prey.

Bone Head: Dunkleosteus' skull was made of several pieces of thick bone, giving it an armored plating that no other creature could break through.

Dunkleosteus didn't really have "teeth," but jagged extensions of its jawbone. A first step in the evolution of teeth, the bones continually grew and stayed sharp as the fish used them to bite through prey. Thick and fang-like in the front, they could easily chop a large victim in half. In back the "teeth" were wide and a little smoother, like molars, and used for grinding food.

Protective Eyewear: To keep them safe, dunkleosteus' eyes were set inside four pieces of thick bone that formed a circular shield.

Widemouth: Each jawbone was connected to the skull by a set of hinges, allowing dunkleosteus to swing open both the upper and lower jaws in a huge gape. 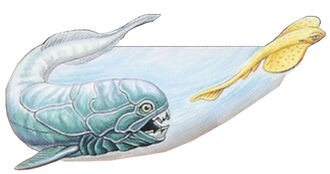 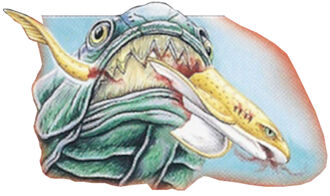 Dunkleosteus was one of the most powerful fish in the Devonian seas. Instead of teeth, this predator had blades of solid bone that could slice and crush just about any creature it found.

This fish's jaws sharpened themselves with every bite.