Weird n' Wild Creatures Wiki
Register
Don't have an account?
Sign In
Advertisement
in: Monsters of the Past, Arthropods, Invertebrates,
and 18 more 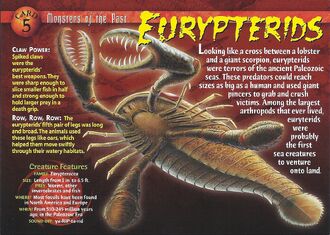 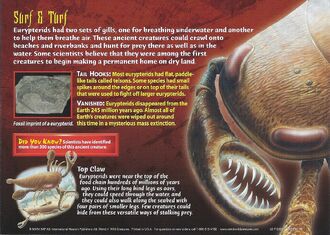 Most fossils have been found in North America and Europe

Worms, other invertebrates and fish

Scientists have identified more than 300 species of this ancient creature.
Looking like a cross between a lobster and a giant scorpion, eurypterids were terrors of the ancient Paleozoic seas. These predators could reach sizes as big as a human and used giant pincers to grab and crush victims. Among the largest arthropods that ever lived, eurypterids were probably the first sea creatures to venture onto land.

Claw Power: Spiked claws were the eurypterids' best weapons. They were sharp enough to slice smaller fish in half and strong enough to hold larger prey in a death grip.

Row, Row, Row: The eurypterids' fifth pair of legs was long and broad. The animals used these legs like oars, which helped them move swiftly through their watery habitats.

Eurypterids had two sets of gills, one for breathing underwater and another to help them breathe air. These ancient creatures could crawl onto beaches and riverbanks and hunt for prey there as well as in the water. Some scientists believe that they were among the first creatures to begin making a permanent home on dry land.

Tail Hooks: Most eurypterids had flat, paddle-like tails called telsons. Some species had small spikes around the edges or on top of their tails that were used to fight off larger eurypterids.

Vanished: Eurypterids disappeared from the Earth 245 million years ago. Almost all of Earth's creatures were wiped out around this time in a mysterious mass extinction.

Eurypterids were near the top of the food chain hundreds of millions of years ago. Using their long hind legs as oars, they could speed through the water, and they could also walk along the seabed with four pairs of smaller legs. Few creatures could hide from these versatile ways of stalking prey.

These "sea scorpions" prowled the bottoms of the ancient oceans long before the dinosaurs or any other creatures walked on land. Eurypterids snapped up worms and even fish with large, spiked claws.

These beasts were up to 6.5 feet long.