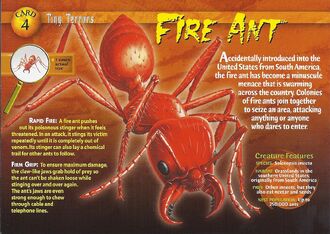 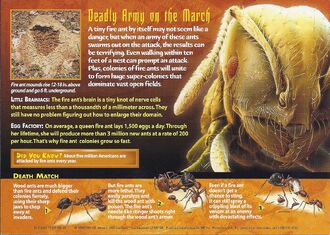 Grasslands in the southern United States; originally from South America

Other insects, but they also eat nectar and seeds

About five million Americans are attacked by fire ants every year.

Accidentally introduced into the United States from South America, the fire ant has become a minuscule menace that is swarming across the country. Colonies of fire ants join together to seize an area, attacking anything or anyone who dares to enter.

Rapid Fire: A fire ant pushes out its poisonous stinger when it feels threatened. In an attack, it stings its victim repeatedly until it is completely out of venom. Its stinger can also la a chemical trail for other ants to follow.

Firm Grip: To ensure maximum damage, the claw-like jaws grab hold of prey so the ant can’t be shaken loose while stinging over and over again. The ant’s jaws are even strong enough to chew through cable and telephone lines.

Deadly Army on the March

A tiny fire ant by itself may not seem like a danger, but when an army of these ants swarm out on the attack, the results can be terrifying. Even walking within ten feet of a nest can prompt an attack. Plus, colonies of fire ants will unite to form huge super-colonies that dominate vast open fields.

Little Brainiacs: The fire ant’s brain is a tiny knot of nerve cells that measures less than a thousandth of a millimeter across. They still have no problem figuring out how to enlarge their domain.

Egg Factory: On average, a queen fire ant lays 1,500 eggs a day. Through her lifetime, she will produce more than 3 million new ants at a rate of 200 per hour. That’s why fire ant colonies grow so fast. 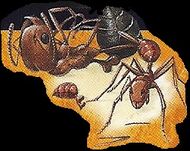 Thousands of these aggressive insects can tackle an intruder as big as a human and even kill the victim with their pinching jaws and poisonous stings.

Fire ants capture other types of ants and make slaves of them.