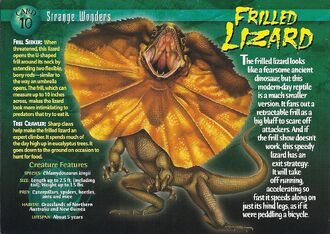 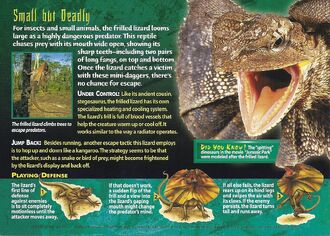 The “spitting” dinosaurs in the movie “Jurassic Park” were modeled after the frilled lizard.

The frilled lizard looks like a fearsome ancient dinosaur, but this modern-day reptile is a much smaller version. It fans out a retractable frill as a big bluff to scare off attackers. And if the frill show doesn’t work, this speedy lizard has an exit strategy: It will take off running, accelerating so fast it speeds along on just its hind legs, as if it were peddling(sic) a bicycle.

Frill Seeker: When threatened, this lizard opens the U-shaped frill around its neck by extending two flexible, bony rods - similar to the way an umbrella opens. The frill, which can measure up to 10 inches across, makes the lizard look more intimidating to predators that try to eat it.

Tree Crawler: Sharp claws help make the frilled lizard an expert climber. It spends much of the day high up in eucalyptus trees. It goes down to the ground on occasion to hunt for food.

For insects and small animals, the frilled lizard looms large as a highly dangerous predator. This reptile chases prey with its mouth open wide, showing its sharp teeth - including two pairs of long fangs, on top and bottom. Once the lizard catches a victim with these mini-daggers, there’s no chance for escape.

Under Control: Like its ancient cousin, stegosaurus, the frilled lizard has its own specialized heating and cooling system. The lizard’s frill is full of blood vessels that help the creature warm up or cool off. It works similar to the way a radiator operates.

Jump Back: Besides running, another escape tactic this lizard employs is to hop up and down like a kangaroo. The strategy seems to be that the attacker, such as a snake or bird of prey, might become frightened by the lizard’s display and back off. 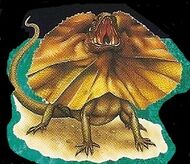 Blending into its surroundings, this lizard can perform a sneak attack, then retreat in what seems like a blur of motion. Its bright, frilled neck can scare larger foes into backing off.

When in a really big hurry, the frilled lizard runs on just its hind legs.
Community content is available under CC-BY-SA unless otherwise noted.
Advertisement