Weird n' Wild Creatures Wiki
Register
Don't have an account?
Sign In
Advertisement
in: Nightmares of Nature, Invertebrates, Centipedes and millipedes,
and 13 more 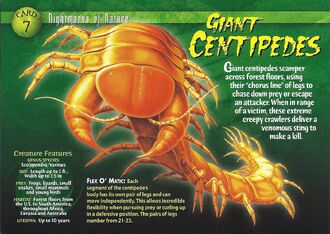 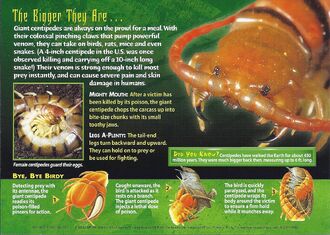 Forest floors from the U.S. to South America; throughout Africa, Eurasia and Australia

Centipedes have walked the Earth for about 450 million years. They were much bigger back then, measuring up to 6 ft. long.

Giant centipedes scamper across forest floors, using their “chorus line” of legs to chase down prey or escape an attacker. When in range of a victim, these extreme creepy crawlers deliver a venomous sting to make a kill.

Flex O’ Matic: Each segment of the centipede’s body has its own pair of legs and can move independently. This allows incredible flexibility when pursuing prey or curling up in a defensive position. The pairs of legs number from 21-23.

The Bigger They Are...

Giant centipedes are always on the prowl for a meal. With their colossal pinching claws that pump powerful venom, they can take on birds, rats, mice and even snakes. (A 4-inch centipede in the U.S. was once observed killing and carrying off a 10-inch long snake!) Their venom is strong enough to kill most prey instantly, and can cause severe pain and skin damage in humans.

Mighty Mouth: After a victim has been killed by its poison, the giant centipede chops the carcass up into bite-size chunks with its small toothy jaws.

Legs A-Plenty: The tail-end legs turn backward and upward. They can hold on to prey or be used for fighting. 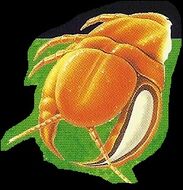 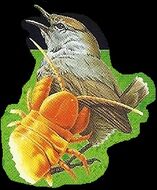 With up to 46 legs to carry it around, the giant centipede is quick and fast. Its remarkable agility makes it hard to catch. Prey has trouble escaping this speedy attacker.

Centipedes can rear up to snatch flying insects from the air.