Weird n' Wild Creatures Wiki
Register
Don't have an account?
Sign In
Advertisement
in: Monsters of the Deep, Octopuses, Cephalopods,
and 3 more 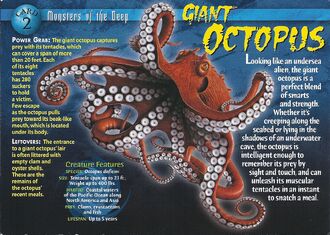 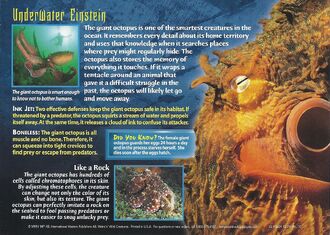 Coastal waters of the Pacific Ocean along North America and Asia

The female giant octopus guards her eggs 24 hours a day and in the process starves herself. She dies soon after the eggs hatch.

Looking like an undersea alien, the giant octopus is a perfect blend of smarts and strength. Whether it's creeping along the seabed or lying in the shadows of an underwater cave, the octopus is intelligent enough to remember its prey by sight and touch, and can unleash its muscular tentacles in an instant to snatch a meal.

Power Grab: The giant octopus captures prey with its tentacles, which can cover a span of more than 20 feet. Each of its eight tentacles has 280 suckers to hold a victim. Few escape as the octopus pulls prey toward its beak-like mouth, which is located under its body.

Leftovers: The entrance to a giant octopus' lair is often littered with empty clam and oyster shells. These are the remains of the octopus' recent meals.

The giant octopus is one of the smartest creatures in the ocean. It remembers every detail about its home territory and uses that knowledge when it searches places where prey might regularly hide. The octopus also stores the memory of everything it touches. If it wraps a tentacle around an animal that gave it a difficult struggle in the past, the octopus will likely let it go and move away.

Ink Jet: Two effective defenses keep the giant octopus safe in its habitat. If threatened by a predator, the octopus squirts a stream of water and propels itself away. At the same time, it releases a cloud of ink to confuse its attacker.

Boneless: The giant octopus is all muscle and no bone. Therefore, it can squeeze into tight crevices to find prey or escape from predators.

The giant octopus has hundreds of cells called chromatophores in its skin. By adjusting these cells, the creature can not only change the color of its skin, but also its texture. The giant octopus can perfectly imitate a rock on the seabed to fool passing predators or make it easier to snag unlucky prey.

Strong tentacles and a combination of stealth give the giant octopus power to take on prey.

+1 Attack Points against Monsters of the Deep
Community content is available under CC-BY-SA unless otherwise noted.
Advertisement