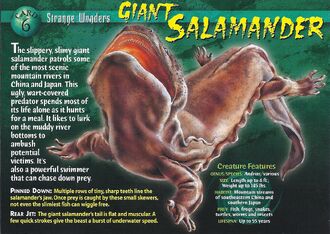 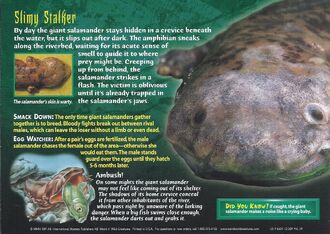 If caught, the Giant Salamander makes a noise like a crying baby.

The slippery, slimy giant salamander patrols most of the scenic mountain rivers in China and Japan. This ugly, wart-covered predator spends most of its life alone as it hunts for a meal. It likes to lurk in muddy water bottoms to ambush potential victims. It's also a powerful swimmer that can chase down prey.

Pinned Down: Multiple rows of tiny, sharp teeth line the salamander's jaw. Once prey is caught by these small skewers, not even the slimiest fish can wiggle free.

Rear Jet: The giant salamander's tail is flat and muscular. A few quick strokes give the beast a burst of underwater speed.

By day the giant salamander stays hidden in a crevice beneath the water, but it slips out after dark. The amphibian sneaks along the riverbed, waiting for its acute sense of smell to guide it to where prey might be. Creeping up from behind, the salamander strikes in a flash. The victim is oblivious until it's already trapped in the salamander's jaw.

Smack Down: The only time giant salamanders gather together is to breed. Bloody fights break out between rival males, which can leave the loser without a limb or even dead.

Egg Watcher: After a pairs egg is fertilized, the male salamander chases the female out of the area - otherwise she would eat them. The male stands guard over the eggs until they hatch 5-6 months later.

On some nights the giant salamander may not feel like coming out of its shelter. The shadows of its home crevice conceal it from other inhabitants of the river, which pass right by, unaware of the lurking danger. When a big fish swims close enough, the salamander darts out and grabs it.