Weird n' Wild Creatures Wiki
Register
Don't have an account?
Sign In
Advertisement
in: Monsters of the Deep, Squids, Cephalopods,
and 12 more 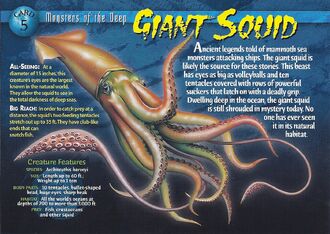 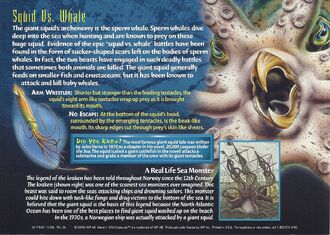 Fish, crustaceans and other squid

The most famous giant squid tale was written by Jules Verne in 1870 as a chapter in his novel, 20,000 Leagues Under the Sea. The squid (called a giant cuttlefish in the novel) attacks a submarine and grabs a member of the crew with its giant tentacles.

Ancient legends told of mammoth sea monsters attacking ships. The giant squid is likely the source of these stories. This beast has eyes as big as volleyballs and ten tentacles covered with rows of powerful suckers that latch on with a deadly grip. Dwelling deep in the ocean, the giant squid is still shrouded in mystery today. No one has ever seen it in its natural habitat.

All-Seeing: At a diameter of 15 inches, this creature’s eyes are the largest known in the natural world. They allow the squid to see in the total darkness of the deep seas.

Big Reach: In order to catch prey at a distance, the squid’s two feeding tentacles stretch out up to 35 ft. They have club-like ends that can snatch fish.

The giant squid’s archenemy is the sperm whale. Sperm whales dive deep into the sea when hunting and are known to prey on these huge squid. Evidence of the epic “squid vs. whale” battles have been found in the form of sucker-shaped scars left on the bodies of sperm whales. In fact, the two beasts have engaged in such deadly battles that sometimes both animals are killed. The giant squid generally feeds on smaller fish and crustaceans, but it has been known to attack and kill baby whales.

Arm Wrestler: Shorter but stronger than the feeding tentacles, the squid’s eight arm-like tentacles wrap up prey as it is brought towards its mouth.

No Escape: At the bottom of the squid’s head, surrounded by the emerging tentacles, is the beak-like mouth. Its sharp edges cut through prey’s skin like shears.

The legend of the kraken has been told throughout Norway since the 12th century. The kraken (shown right) was one of the scariest sea monsters ever imagined. This beast was said to roam the seas attacking ships and drowning sailors. This monster could bite down with tusk-like fangs and drag victims to the bottom of the sea. It is believed that the giant squid is the basis of this legend because the North Atlantic Ocean has been on of the best places to find giant squid washed up on the beach. In the 1930’s, a Norwegian ship was actually attacked by a giant squid.