Weird n' Wild Creatures Wiki
Register
Don't have an account?
Sign In
Advertisement
in: Monsters of the Deep, Invertebrates, Indian Ocean,
and 5 more 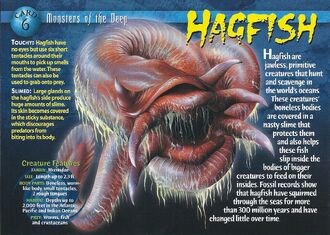 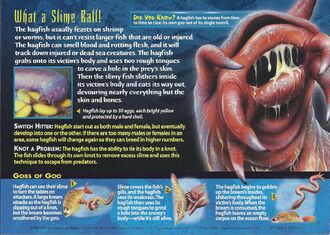 Depths up to 2,000 feet in the Atlantic, Pacific, and Indian Oceans

A hagfish has to sneeze from time to time to clear its own goo out of its single nostril.
Hagfish are jawless, primitive creatures that hunt and scavenge in the world’s oceans. These creatures’ boneless bodies are covered in a nasty slime that protects them and also helps these fish slip inside the bodies of bigger creatures to feed on their insides. Fossil records show that hagfish have squirmed through the seas for more than 200 million years and have changed little over time.

Touchy: Hagfish have no eyes but use six short tentacles around their mouths to pick up smells from the water. These tentacles can also be used to grab onto prey.

Slimed: Large glands on the hagfish’s side produce huge amounts of slime. Its skin becomes covered in the sticky substance, which discourages predators from biting into its body.

What a Slime Ball!

The hagfish usually feasts on shrimp or worms, but it can’t resist larger fish that are old or injured. The hagfish can smell blood and rotting flesh, and it will track down injured or dead sea creatures. The hagfish grabs onto its victim’s body and uses two rough tongues to carve a hole in the prey’s skin. Then the slimy fish slithers inside its victim’s body and eats its way out, devouring nearly everything but the skin and bones.

Switch Hitter: Hagfish start out as both male and female, but eventually develop into one or the other. If there are too many males or females in an area, some hagfish will change again so they can breed in higher numbers.

Knot a Problem: The hagfish has the ability to tie its body in a knot. The fish slides through its own knot to remove excess slime and uses this technique to escape from predators. 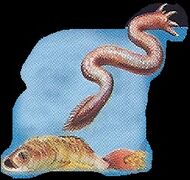 This worm-like fish is small, but it can take down creatures several times its size. The slimy hagfish burrows itself into the bodies of live victims with its rough tongue, then begins to eat its way back out.

The hagfish can survive up to seven months without eating.
Community content is available under CC-BY-SA unless otherwise noted.
Advertisement