Weird n' Wild Creatures Wiki
Register
Don't have an account?
Sign In
Advertisement
in: Monsters of the Deep, Fish, Vertebrates,
and 6 more 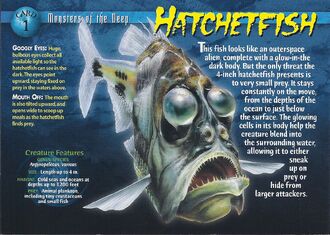 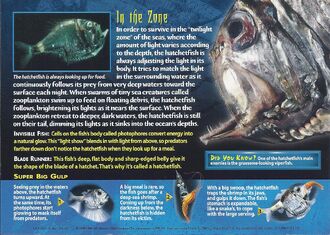 Cold seas and oceans at depths up to 3,200 feet

This fish looks like an outer space alien, complete with a glow-in-the-dark body. But the only threat the 4-inch hatchetfish presents is to very small prey. It stays constantly on the move, from the depths of the ocean to just below the surface. The glowing cells in its body help the creature blend in to the surrounding water, allowing it to either sneak up on prey or hide from larger attackers.

Googly Eyes: Huge, bulbous eyes collect all available light so the hatchetfish can see in the dark. The eyes point upward, staying fixed on prey in the waters above.

Mouth Off: The mouth is also tilted upward, and opens wide to scoop up meals as the hatchetfish finds prey.

In order to survive in the "twilight zone" of the seas, where the amount of light varies according to the depth, the hatchetfish is always adjusting the light in its body. It tries to match the light in the surrounding water as it continuously follows it prey from very deep waters toward the surface every night. When swarms of tiny creatures called zooplankton swim up to feed on floating debris, the hatchetfish follows, brightening its lights as it nears the surface. When the zooplankton retreat to deeper, dark waters, the hatchetfish is still on their tail, dimming its lights as it sinks into the ocean's depths.

Invisible Fish: Cells on the fish's body called photophores convert energy into a natural glow. This "light show" blends in with light from above, so predators farther down don't notice the hatchetfish when they look up for a meal.

Blade Runner: This fish's deep, flat body and sharp-edged belly give it the shape of the blade of a hatchet. That's why it's called a hatchetfish.

Though it lives deep in the Earth's oceans, this fish looks like it came from another planet. Eerie light shining from its body helps confuse undersea attackers.

The hatchet fish's underwater light-show works much like a firefly's.
Community content is available under CC-BY-SA unless otherwise noted.
Advertisement