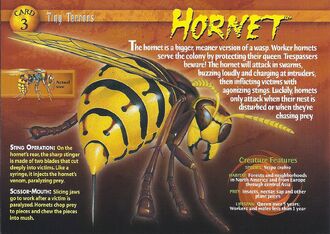 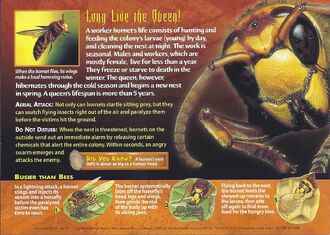 Queen over 5 years; Workers and males less than 1 year

A hornet’s nest is about as big as a human head.

The hornet is a bigger, meaner version of a wasp. Worker hornets serve the colony by protecting their queen. Trespassers beware! The hornet will attack in swarms, buzzing loudly and charging at intruders, then inflicting victims with agonizing stings. Luckily, hornets only attack when their nest is disturbed or when they’re chasing prey.

Sting Operation: On the hornet’s rear, the sharp stinger is made of two blades that cut deeply into victims. Like a syringe, it injects the hornet’s venom, paralyzing prey.

Scissor-Mouth: Slicing jaws go to work after a victim is paralyzed. Hornets chop prey to pieces and chew the pieces into mush.

A worker hornet’s life consists of hunting and feeding the colony’s larvae (young) by day, and cleaning the nest at night. The work is seasonal. Males and workers, which are mostly female, live for less than a year. They freeze or starve to death in the winter. The queen, however, hibernates through the cold season and begins a new nest in spring. A queen’s lifespan is more than 5 years.

Aerial Attack: Not only can hornets startle sitting prey, but they can snatch flying insects right out of the air and paralyze them before the victims hit the ground.

Do Not Disturb: When the nest is threatened, hornets on the outside send an immediate alarm by releasing certain chemicals that alert the entire colony. Within seconds, an angry swarm emerges and attacks the enemy. 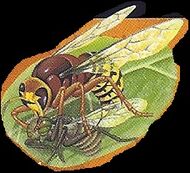 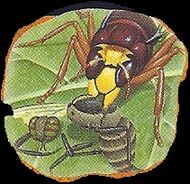 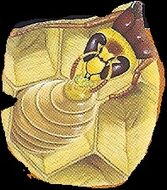 A hornet can live a very peaceful life - until an intruder comes near its nest. When a hornet is alarmed, it buzzes out and attacks any threat in an instant.

Hornets snip the legs off victims before carrying them back to the nest.
Community content is available under CC-BY-SA unless otherwise noted.
Advertisement