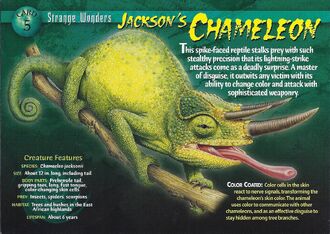 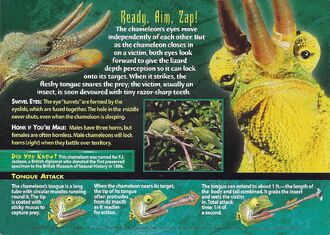 About 12 in. long, including tail

Trees and bushes in the East African highlands

This Chameleon was named after F.J. Jackson, a British diplomat who donated the first preserved specimen to the British Museum of Natural History in 1896.

This spike-faced reptile stalks its prey with such stealthy precision that its lightning strike attacks come as a deadly surprise. A master of disguise, it outwits any victim with its ability to change color and attack with sophisticated weaponry.

Color Coated: Color cells in the skin react to nerve signals, transforming the Chameleon's skin color. The animal uses its color to communicate with other Chameleons, and as an effective disguise to stay hidden among the trees branches.

The Chameleons eyes move independently of each other. But as the Chameleon closes in on a victim, both eyes look forward to give the lizard depth perception so it can lock onto its target. When it strikes, the fleshy tongue snares the prey; the victim, usually an insect, is soon devoured with tiny razor sharp teeth.

Swivel Eyes: The eyes "turrets" are formed by the eyelids, which are fused together. The hole in the middle never shuts, even when the Chameleon is sleeping.

Honk If You're Male: Males have three horns, but females are hornless. Male Chameleons will lock horns (right) when they battle over territory.

The ability of this wily lizard to change colors and become nearly invisible makes it difficult to find. It seems to come out of nowhere to strike its victims.

Natives believe the chameleon was created from parts of other animals, such as the tail of a monkey and the horns of a rhino.
Community content is available under CC-BY-SA unless otherwise noted.
Advertisement