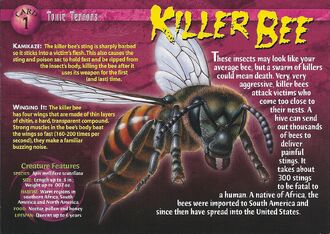 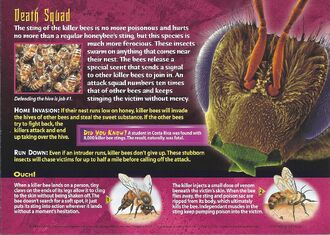 Queens up to 6 years

A student in Costa Rica was found with 8,000 killer bee stings. The result, naturally, was fatal.

These insects may look like your average bee, but a swarm of killers could mean death. Very, very aggressive, killer bees attack victims who come too close to their nests. A hive can send out thousands of bees to deliver painful stings. It takes about 300 stings to be fatal to a human. A native of Africa, the bees were imported to South America and since then have spread into the United States.

Kamikaze: The killer bee's sting is sharply barbed so it sticks into a victim's flesh. This also causes the sting and poison sac to hold fast and be ripped from the insect's body, killing the bee after it uses its weapon for the first (and last) time.

Winging It: The killer bee has four wings that are made of thin layers of chitin, a hard, transparent compound. Strong muscles in the bee's body beat the wings so fast (160-200 times per second), they make a familiar buzzing noise.

The sting of the killer bees is no more poisonous and hurts no more than a regular honeybee's sting, but this species is much more ferocious. These insects swarm on anything that comes near their nest. The bees release a special scent that sends a signal to other killer bees to join in. An attack squad numbers ten times that of other bees and keeps stinging the victim without mercy.

Home Invasion: If their nest runs low on honey, killer bees will invade the hives of other bees and steal the sweet substance. If the other bees try to fight back, the killers attack and end up taking over the hive.

Run Down: Even if an intruder runs, killer bees don't give up. These stubborn insects will chase victims for up to half a mile before calling off the attack.

Killer bees are much like other bees, except more aggressive. They attack without warning and chase victims for hundreds of yards.

+1 attack against Nightmares of Nature