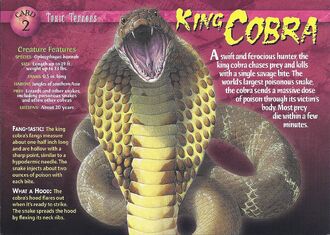 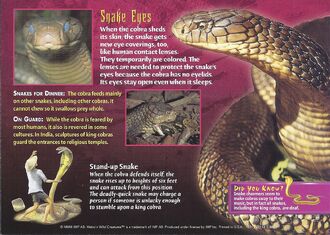 Lizards and other snakes, including poisonous snakes and often other cobras

Snake charmers seem to make cobras sway to their music, but in fact all snakes, including the king cobra, are deaf.
A swift and ferocious hunter, the king cobra chases prey and kills with a single savage bite. The world’s largest poisonous snake, the cobra sends a massive dose of poison through its victim’s body. Most prey die within a few minutes.

Fang-tastic: The king cobra’s fangs measure about one-half inch long and are hollow with a sharp point, similar to a hypodermic needle. The snake injects about two ounces of poison with each bite.

What a Hood:The cobra’s hood flares out when it’s ready to strike. The snake spreads the hood by flexing its neck ribs.

When the cobra sheds its skin, the snake gets new eye coverings, too, like human contact lenses. They temporarily are colored. The lenses are needed to protect the snake’s eyes because the cobra has no eyelids. Its eyes stay open even when it sleeps.

Snakes for Dinner: The cobra feeds mainly on other snakes, including other cobras. It cannot chew so it swallows prey whole.

On Guard: While the cobra is feared by most humans, it is also revered in some cultures. In India, sculptures of king cobras guard the entrances to religious temples.

When the cobra defends itself, the snake rises up to heights of six feet and can attack from this position. The deadly-quick snake may charge a person if someone is unlucky enough to stumble upon a king cobra.

A quick strike from this slithering snake sends deadly toxins into its victim’s body through long, sharp fangs.

+1 attack points against Nightmares of Nature
Community content is available under CC-BY-SA unless otherwise noted.
Advertisement