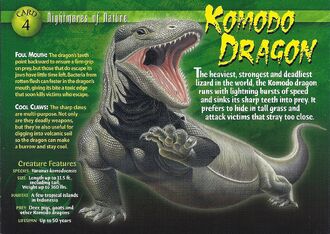 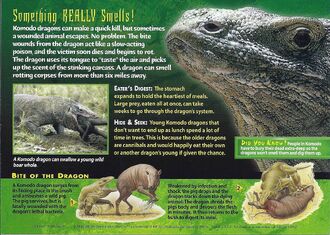 A few tropical islands in Indonesia

People in Komodo have to bury their dead extra-deep so the dragons won’t smell them and dig them up.

The heaviest, strongest and deadliest lizard in the world, the Komodo dragon runs with lightning bursts of speed and sinks its sharp teeth into prey. It prefers to hide in tall grass and attack victims that stray too close.

Foul Mouth: The dragon’s teeth point backward to ensure a firm grip on prey, but those that do escape its jaws have little time left. Bacteria from rotten flesh can fester in the dragon’s mouth, giving its bite a toxic edge that soon kills victims who escape.

Cool Claws: The sharp claws are multi-purpose. Not only are they deadly weapons, but they’re also useful for digging into volcanic soil so the dragon can make a burrow and stay cool.

Komodo dragons can make a quick kill, but sometimes a wounded animal escapes. No problem. The bite wounds from the dragon act like a slow-acting poison, and the victim soon dies and begins to rot. The dragon uses its tongue to “taste” the air and picks up the scent of the stinking carcass. A dragon can smell rotting corpses from more than six miles away.

Eater’s Digest: The stomach expands to hold the heartiest of meals. Large prey, eaten all at once, can take weeks to go through the dragon’s system.

Hide & Seek: Young Komodo dragons that don’t want to end up as lunch spend a lot of time in trees. This is because the older dragons are cannibals and would happily eat their own or another dragon’s young if given the chance.

Bite of the Dragon 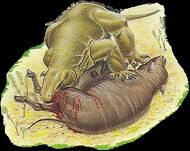 The largest living lizard on Earth, the Komodo dragon’s sharp teeth are surrounded by bacteria that fester in a bite wound and rot its victim’s flesh.

A vicious reputation has given this lizards the nickname “land crocodile.”
Community content is available under CC-BY-SA unless otherwise noted.
Advertisement