Weird n' Wild Creatures Wiki
Register
Don't have an account?
Sign In
Advertisement
in: Monsters of the Mind, Dragons, English folklore,
and 3 more 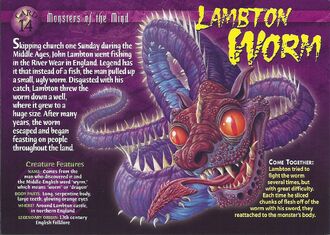 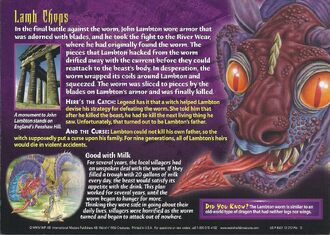 Comes from the man who discovered it and the Middle-English word “wyrm,” which means “worm” or “dragon”

Around Lambton castle, in northern England

The Lambton worm is similar to an old-world type of dragon that had neither legs nor wings.

Skipping church one Sunday during the Middle Ages, John Lambton went fishing in the River Wear in England Legend has it that instead of a fish, the man pulled up a small, ugly worm. Disgusted with his catch, Lambton threw the worm down a well, where it grew to a huge size. After many years, the worm escaped and began feasting on people throughout the land.

Come Together: Lambton tried to fight the worm several times, but with great difficulty. Each time he sliced chunks of flesh off of the worm with his sword, they reattached to the monster’s body.

In the final battle against the worm, John Lambton wore armor that was adorned with blades, and he took the fight to the River Wear, where he had originally found the worm. The pieces that Lambton hacked from the worm drifted away with the current before they could reattach to the beast’s body. In desperation, the worm wrapped its coils around Lambton and squeezed. The worm was sliced to pieces by the blades on Lambton’s armor and was finally killed.

Here’s the Catch: Legend has it that a witch helped Lambton devise his strategy for defeating the worm. She told him that after he killed the beast, he had to kill the next living thing he saw. Unfortunately, that turned out to be Lambton’s father.

And the Curse: Lambton could not kill his own father, so the witch supposedly put a curse upon his family. For nine generations, all of Lambton’s heirs would die in violent accidents.

For several years, the local villagers had an unspoken deal with the worm. If they filled a trough with 20 gallons of milk every day, the beast would satisfy its appetite with the drink. This plan worked for several years, until the worm began to hunger for more. Thinking they were safe in going about their daily lives, villagers were horrified as the worm turned and began to attack out of nowhere.

This land serpent takes on all enemies with its sharp teeth. In fights when parts of the worm's body are sliced off, they reattach themselves.

The Lambton worm is related to the wyvern.