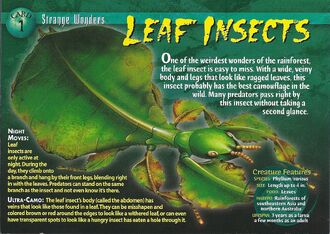 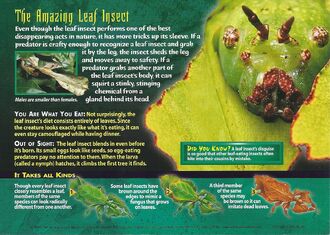 3 years as a larva; a few months as an adult

A leaf insect's disguise is so good that other leaf-eating insects often bite into their cousins by mistake.

One of the weirdest wonders of the rainforest, the leaf insect is easy to miss. With a wide, veiny body and legs that look like ragged leaves, this insect probably has the best camouflage in the wild. Many predators pass right by this insect without taking a second glance.

Night Moves: Leaf insects are only active at night. During the day, they climb onto a branch and hang by their front legs, blending right in with the leaves. Predators can stand on the same branch as the insect and not even know it's there.

Ultra-Camo: The leaf insect's body (called the abdomen) has veins that look like those found in a leaf. They can be misshapen and colored brown or red around the edges to look like a withered leaf, or can even have transparent spots to look like a hungry insect has eaten a hole through it.

Even though the leaf insect performs one of the best disappearing acts in nature, it has more tricks up its sleeve. If a predator is crafty enough to recognize a leaf insect and grab it by the leg, the insect sheds the leg and moves away to safety. If a predator grabs another part of the leaf insect's body, it can squirt a stinky, stinging chemical from a gland behind its head.

You Are What You Eat: Not surprisingly, the leaf insect's diet consists entirely of leaves. Since the creature looks exactly like what it's eating, it can even stay camouflaged while having dinner.

Out of Sight: The leaf insect blends in even before it's born. Its small eggs look like seeds, so egg-eating predators pay no attention to them. When the larva (called a nymph) hatches, it climbs the first tree it finds.

It Takes all Kinds

When trouble is nearby, all the leaf insect has to do is stay perfectly still. Its camouflage is so good that predators in the rainforest pass right by this insect without giving it a second glance

If a young leaf insect loses an antenna, one will grow back.
Community content is available under CC-BY-SA unless otherwise noted.
Advertisement