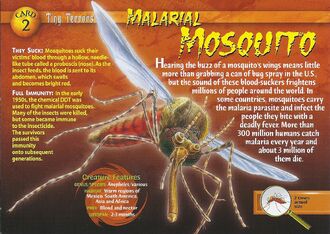 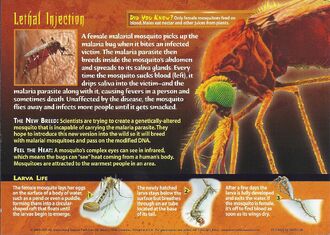 Only female mosquitoes feed on blood. Males eat nectar and other juices from plants.

Hearing the buzz of a mosquito’s wings means little more than grabbing a can of bug spray in the U.S., but the sound of these blood-suckers frightens millions of people around the world. In some countries, mosquitoes carry the malaria parasite and infect the people they bite with a deadly fever. More than 300 million humans catch malaria every year and about 3 million of them die.

They Suck: Mosquitoes suck their victims’ blood through a hollow, needle-like tube called a proboscis (nose). As the insect feeds, the blood is sent to its abdomen, which swells and becomes bright red.

Full Immunity:In the early 1950s, the chemical DDT was used to fight malarial mosquitoes. Many of the insects were killed, but some became immune to the insecticide. The survivors passed this immunity onto subsequent generations.

The New Breed: Scientists are trying to create a genetically-altered mosquito that is incapable of carrying the malaria parasite. They hope to introduce this new version into the wild so it will breed with malarial mosquitoes and pass on the modified DNA.

Feel the Heat: A mosquito’s complex eyes can see in infrared, which means the bugs can “see” heat coming from a human’s body. Mosquitoes are attracted to the warmest people in an area. 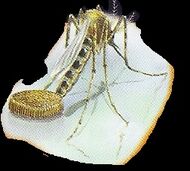 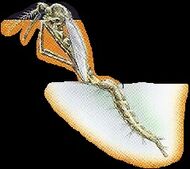 This pesky insect has a more dangerous bite than its irritating cousins. This mosquito carries the deadly malaria parasite, and can spread it to several victims before coming to an end with an abrupt swat.

Mosquitoes spread other diseases, such as yellow fever.
Community content is available under CC-BY-SA unless otherwise noted.
Advertisement