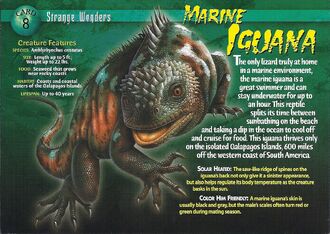 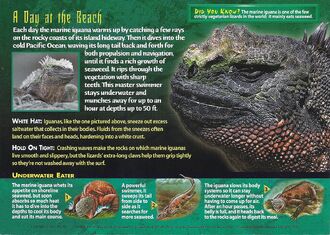 Coasts and coastal waters of the Galapagos Islands

Seaweed that grows near rocky coasts

The marine iguana is one of the few strictly vegetarian lizards in the world; it mainly eats seaweed.

The only lizard truly at home in a marine environment, the marine iguana is a great swimmer and can stay underwater for up to an hour. This reptile splits its time between sunbathing on the beach and taking a dip in the ocean to cool off and cruise for food. This iguana thrives only on the isolated Galapagos Islands, 600 miles off the western coast of South America.

Solar Heated: The saw-like ridge of spines on the iguana’s back not only give it a sinister appearance, but also helps regulate its body temperature as the creature basks in the sun.

Color Him Friendly: A marine iguana’s skin is usually black and gray, but the male’s scales often turn red or green during mating season.

A Day at the Beach

Each day the marine iguana warms up by catching a few rays on the rocky coasts of its island hideway (sic). Then it dives into the cold Pacific Ocean, waving its long tail back and forth for both propulsion and navigation, until it finds a rich growth of seaweed. It rips through the vegetation with sharp teeth. This master swimmer stays underwater and munches away for up to an hour at depths up to 50 ft.

White Hat: Iguanas, like the one pictured above, sneeze out excess saltwater that collects in their bodies. Fluids from the sneeze often land on their faces and heads, hardening into a white crust.

Hold On Tight: Crashing waves make the rocks on which marine iguanas live smooth and slippery, but the lizards’ extra-long claws help them grip tightly so they’re not washed away with the surf. 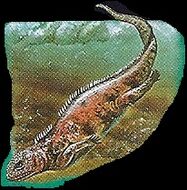