Weird n' Wild Creatures Wiki
Register
Don't have an account?
Sign In
Advertisement
in: Monsters of the Past, Sharks, Oceania,
and 26 more 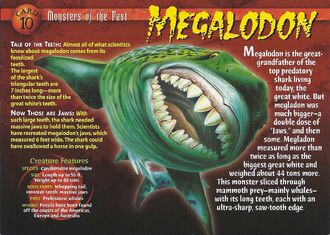 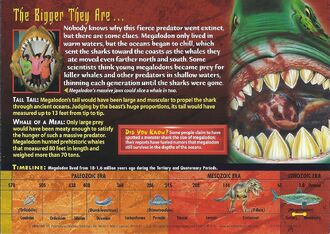 Fossils have been found off the coasts of the Americas, Europe and Australia

Some people claim to have spotted a monster shark the size of megalodon; their reports have fueled rumors that megalodon still survives in the depths of the oceans.
Megalodon is the great-grandfather of the top predatory shark living today, the great white. But megalodon was much bigger - a double dose of "Jaws," and then some. Megalodon measured more than twice as long as the biggest great white and weighed about 44 tons more. This monster sliced through mammoth prey - mainly whales - with its long teeth, each with an ultra-sharp, saw-tooth edge.

Tale of the Teeth: Almost all of what scientists know about megalodon comes from its fossilized teeth. The largest of the shark's triangular teeth are 7 inches long - more than twice the size of the great white's teeth.

Now Those are Jaws: With such large teeth, the shark needed massive jaws to hold them. Scientists have recreated megalodon's jaws, which measured 6 feet wide. The shark could have swallowed a horse in one gulp.

The Bigger They Are...

Nobody knows why this massive predator went extinct, but there are some clues. Megalodon only lived in warm waters, but the oceans began to chill, which sent the sharks toward the coasts as the whales they ate moved even farther north and south. Some scientists think young megalodons became prey for killer whales and other predators in shallow waters, thinning each generation until the sharks were gone.

Tall Tail: Megalodon's tail would have been large and muscular to propel the shark through ancient oceans. Judging by the beast's huge proportions, its tail would have measured up to 13 feet from tip to tip.

Whale of a Meal: Only large prey would have been meaty enough to satisfy the hunger of such a massive predator. Megalodon hunted prehistoric whales that measured 80 feet in length and weighed more than 70 tons.

Megalodon lived from 18 - 1.6 million years ago during the Tertiary and Quaternary Periods.

The biggest shark of all time, megalodon was the undisputed king of the seas 20 million years ago. Six-inch teeth made short work of prehistoric whales that were twice the shark's size.