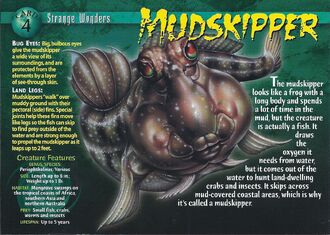 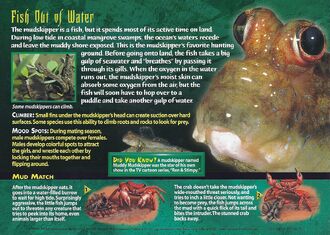 Mangrove swamps on the tropical coasts of Africa, southern Asia and northeastern Australia

A mudskipper named Muddy Mudskipper was the star of his own show in the TV cartoon series, "Ren & Stimpy."

The mudskipper looks like a frog with a long body and spends a lot of time in the mud, but the creature is actually a fish. It draws the oxygen it needs from the water, but it comes out of the water to hunt land-dwelling crabs and insects. It skips across mud-covered coastal areas, which is why it's called a mudskipper.

Bug Eyes: Big, bulbous eyes give the mudskipper a wide view of its surroundings, and are protected from the elements by a layer of see through skin.

Land Legs: Mudskippers "walk" over muddy ground with their pectoral (side) fins. Special joints help these fins move like legs so the fish can skip to find prey outside the water and are strong enough to propel the mudskipper as it leaps up to 2 feet.

Fish Out of Water

The mudskipper is a fish, but it spends most of its active time on land. During low tide in coastal mangrove swamps, the ocean's waters recede and leave the muddy shore exposed. This is the mudskipper's favorite hunting ground. Before going onto land, the fish takes a big gulp of seawater and "breathes" by passing it through its gills. When the oxygen in the water runs out, the mudskipper's moist skin can absorb some oxygen from the air, but the fish will soon have to hop over to a puddle and take another gulp of water.

Climber: Small fins under the mudskipper's head can create suction over hard surfaces. Some species use this ability to climb roots and rocks to look for prey.

Mood Spots: During mating season, male mudskippers compete over females. Males develop colorful spots to attract the girls, and wrestle each other by locking their mouths together and flipping around.