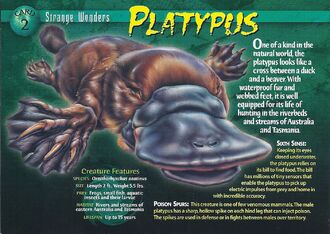 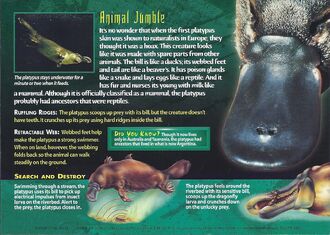 Rivers and streams of eastern Australia and Tasmania

Though it now lives only in Australia and Tasmania, the Platypus had ancestors that lived in what is now Argentina

One of a kind in the natural world, the Platypus looks like a cross between a duck and a beaver. With waterproof fur and webbed feet, it is well equipped for its life of hunting in the river beds of Australia and Tasmania.

Sixth Sense: Keeping its eyes closed underwater. the Platypus relies on its bill to find food. The bill has millions of tiny sensors that enable the Platypus to pick up electric impulses and home in incredible accuracy

Poison Spurs: This creature is one of few venomous mammals. The male Platypus has a sharp, hollow spike on each hind leg that can inject poison. The spikes are used in defense or in fights between males over territory.

Its no wonder that when the first Platypus skin was shown to naturalists in Europe, they thought it was a hoax. This creature looks like it was made with spare parts from other animals. The bill is like a ducks; its webbed feet and tail are like a beaver's. It has poison glands like a snake and lays eggs like a reptile. And it has fur and nurses its young with milk like a mammal. Although it is officially classified as a mammal, the Platypus probably has ancestors that were reptiles.

Ruffling Ridges: The Platypus scoops up prey with its bill, but the creature doesn't have teeth. It crunches up its prey by using hard ridges inside the bill.

Retractable Web: Webbed feet help make the Platypus a strong swimmer. When on land, however the webbing folds back so the animal can walk steadily on ground.

Those who first encounter a Platypus may very well wonder what this strange looking mammal is. But don't get too close- its poison spur can leave intruders with a terrible wound.

The Platypus growls like a dog when disturbed
Community content is available under CC-BY-SA unless otherwise noted.
Advertisement