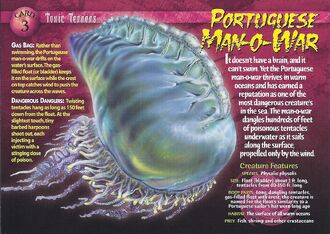 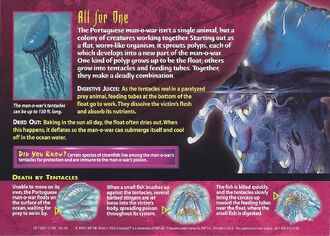 Long, dangling tentacles, gas-filled float with crest; the creature is named for the float’s similarity to a Portuguese sailor’s hat worn long ago

The surface of all warm oceans

Fish, shrimp and other crustaceans

It doesn’t have a brain, and it can’t swim. Yet the Portuguese man-o-war thrives in warm oceans and has earned a reputation as one of the most dangerous creature’s (sic) in the sea. The man-o-war dangles hundreds of feet of poisonous tentacles underwater as it sails along the surface, propelled only by the wind.

Gas Bag: Rather than swimming, the Portuguese man-o-war drifts on the water’s surface. The gas-filled float (or bladder) keeps it on the surface while the crest on top catches wind to push the creature across the waves.

Dangerous Danglers: Twisting tentacles hang as long as 150 feet down from the float. At the slightest touch, tiny barbed harpoons shoot out, each injecting a victim with a stinging dose of poison.

The Portuguese man-o-war isn’t a single animal, but a colony of creatures working together. Starting out as a flat, worm-like organism, it sprouts polyps, each of which develops into a new part of the man-o-war. One kind of polyp grows up to be the float; others grow into tentacles and feeding tubes. Together, they make a deadly combination.

Digestive Juices: As the tentacles reel in a paralyzed prey animal, feeding tubes at the bottom of the float go to work. They dissolve the victim’s flesh and absorb its nutrients.

Dried Out: Baking in the sun all day, the float often dries out. When this happens, it deflates so the man-o-war can submerge itself and cool off in the ocean water. 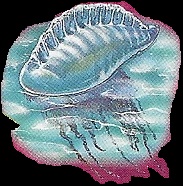 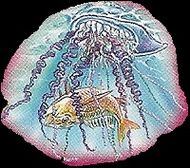 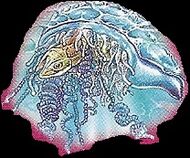 The Portuguese man-o-war is a colony of small organisms that combine to make one of the most dangerous creatures in the sea. Billions of stinging cells hang on tentacles that reach as far as 150 feet down.