Weird n' Wild Creatures Wiki
Register
Don't have an account?
Sign In
Advertisement
in: Monsters of the Past, Pterosaurs, Reptiles,
and 12 more 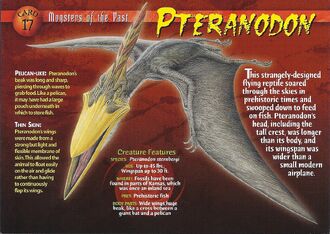 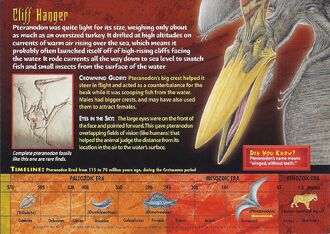 Fossils have been found in parts of Kansas, which was once an inland sea

Wide wings, huge beak, like a cross between a giant bat and a pelican

This strangely-designed flying reptile soared through the skies in prehistoric times and swooped down to feed on fish. Pteranodon’s head, including the tall crest, was longer than its body, and its wingspan was wider than a small modern airplane.

Pelican-Like: Pteranodon’s beak was long and sharp, piercing through waves to grab food. Like a pelican, it may have had a large pouch underneath in which to store food.

Thin Skin: Pteranodon’s wings were made from a strong but light and flexible membrane of skin. This allowed the animal to float easily on the air and glide rather than having to continuously flap its wings.

Pteranodon was quite light for its size, weighing only about as much as an oversized turkey. It drifted at high altitudes on currents of warm air rising over the sea, which means it probably launched itself off of high-rising cliffs facing the water. It rode currents all the way down to sea level to snatch fish and small insects from the surface of the water.

Crowning Glory: Pteranodon’s big crest helped it steer in flight and acted as a counterbalance for the beak while it was scooping fish from the water. Males had bigger crests, and may have also used them to attract females.

Eyes in the Sky: The large eyes were on the front of the face and pointed forward. This gave pteranodon overlapping fields of vision (like humans) that helped the animal judge the distance from its location in the air to the water’s surface.

Pteranodon lived from 115 to 70 million years ago, during the Cretaceous period.

Pteranodon terrorized creatures living in the prehistoric seas. Perching high on a cliff, it swooped down to the waves and snapped up a mouthful of squirming fish.

Pteranodon’s wings were made of skin stretched over bone.