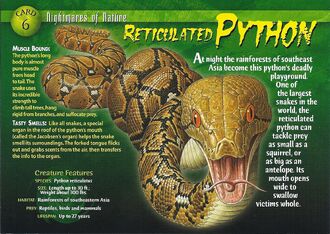 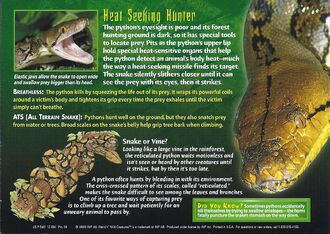 Sometimes pythons accidentally kill themselves by trying to swallow antelopes - the horns fatally puncture the snake’s stomach on the way down.

At night the rainforests of southeast Asia become this python’s deadly playground. One of the largest snakes in the world, the reticulated python can tackle prey as small as a squirrel, or as big as an antelope. Its mouth opens wide to swallow victims whole.

Tasty Smells: Like all snakes, a special organ in the roof of the python’s mouth (called the Jacobsen’s organ) help the snake smell its surroundings. The forked tongue flicks out and grabs scents from the air, then transfers the info to the organ.

The python’s eyesight is poor and its forest hunting ground is dark, so it has special tools to locate prey. Pits in the python’s upper lip hold special heat-sensitive organs that help the python detect an animal’s body heat - much the way a heat-seeking missile finds its target. The snake silently slithers closer until it can see the prey with its eyes, then it strikes.

Breathless: The python kills by squeezing the life out of its prey. It wraps its powerful coils around a victim’s body and tightens its grip every time the prey exhales until the victim simply can’t breathe.

ATS (All Terrain Snake): Pythons hunt well on the ground, but they also snatch prey from water or trees. Broad scales on the snake’s belly help grip tree bark when climbing.

Looking like a large vine in the rainforest, the reticulated python waits motionless and isn’t seen or heard by other creatures until it strikes, but by then it’s too late. A python often hunts by blending in with its environment. The criss-crossed pattern of its scales, called “reticulated,” makes the snake difficult to see among the leaves and branches. One of its favorite ways of capturing prey is to climb up a tree and wait patiently for an unweary(sic) animal to pass by.