Weird n' Wild Creatures Wiki
Register
Don't have an account?
Sign In
Advertisement
in: Monsters of the Past, Felids, Mammals,
and 17 more 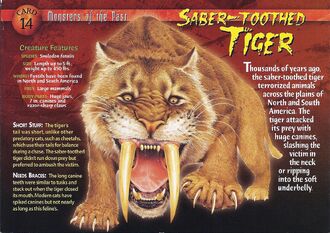 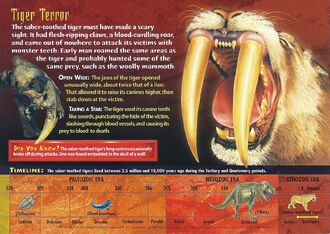 Fossils have been found in North and South America

The saber-toothed tiger’s long canines occasionally broke off during attacks. One was found embedded in the skull of a wolf.

Thousands of years ago, the saber-toothed tiger terrorized animals across the plains of North and South America. The tiger attacked its prey with huge canines, slashing the victim in the neck or ripping into the soft underbelly.

Short Stuff: The tiger’s tail was short, unlike other predatory cats, such as cheetahs, which use their tails for balance during a chase. The saber-toothed tiger didn’t run down prey but preferred to ambush the victim.

Needs Braces: The long canine teeth were similar to tusks and stuck out when the tiger closed its mouth. Modern cats have spiked canines but not nearly as long as this feline’s.

The saber-toothed tiger must have made a scary sight. It had flesh-ripping claws, a blood-curdling roar, and came out of nowhere to attack its victims with monster teeth. Early man roamed the same areas as the tiger and probably hunted some of the same prey, such as the woolly mammoth.

Open Wide: The jaws of the tiger opened unusually wide, about twice that of a lion. That allowed it to raise its canines higher, then stab down at the victim.

Taking a Stab: The tiger used its canine teeth like swords, puncturing the hides of the victim, slashing through blood vessels, and causing its prey to bleed to death.

The saber-toothed tigers lived between 2.5 million and 10,000 years ago during the Tertiary and Quaternary periods.