Weird n' Wild Creatures Wiki
Register
Don't have an account?
Sign In
Advertisement
in: Monsters of the Past, Dinosaurs, Sauropods,
and 9 more 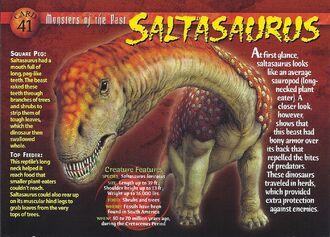 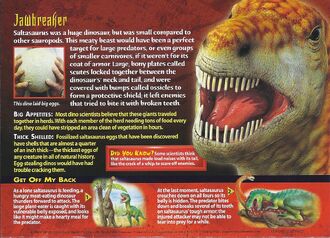 Fossils have been found in South America

80 to 70 million years ago, during the Cretaceous Period

Some scientists think that saltasaurus made loud noises with its tail, like the crack of a whip, to scare off enemies
At first glance, saltasaurus looks like an average sauropod (long-necked plant eater). A closer look, however, shows that this beast had bony armor over its back that repelled the bites of predators. These dinosaurs traveled in herds, which provided extra protection against enemies.

Get Off My Back

Saltasaurus was small for a sauropod, but its bumpy back armor kept it safe from meat-eaters. Its long neck helped it reach high vegetation.

This dinosaur is named for Argentina's Salta region.

+1 defense against Monsters of the Past
Community content is available under CC-BY-SA unless otherwise noted.
Advertisement