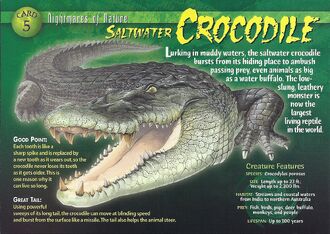 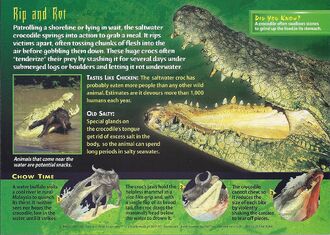 Streams and coastal waters from India to northern Australia

A crocodile often swallows stones to grind up food in its stomach.

Lurking in muddy waters, the saltwater crocodile bursts from its hiding place to ambush passing prey, even animals as big as a water buffalo. The low-slung, leathery monster is now the largest living reptile in the world.

Good Point: Each tooth is like a sharp spike and is replaced by a new tooth as it wears out, so the crocodile never loses its teeth as it gets older. This is one reason why it can live so long.

Great Tail: Using powerful sweeps of its long tail, the crocodile can move at blinding speed and burst from the surface like a missile. The tail also helps the animal steer.

Patrolling a shoreline or lying in wait, the saltwater crocodile springs into action to grab a meal. It rips victims apart, often tossing chunks of flesh into the air before gobbling them down. These huge crocs often “tenderize” their prey by stashing it for several days under submerged logs or boulders and letting it rot underwater.

Tastes Like Chicken: The saltwater croc has probably eaten more people than any other wild animal. Estimates are it devours more than 1,000 humans each year.

Old Salty: Special glands on the crocodile’s tongue get rid of excess salt in the body, so the animal can spend long periods in salty seawater. 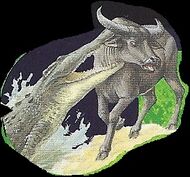 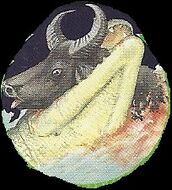 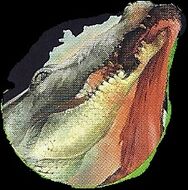