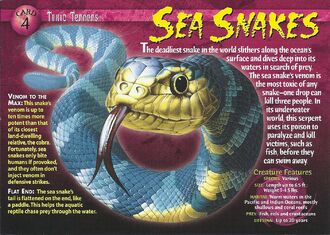 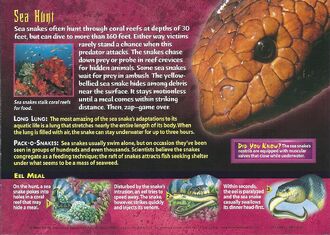 Warm waters in the Pacific and Indian Oceans, mostly shallows and coral reefs

The sea snake’s nostrils are equipped with muscular valves that close while underwater.

The deadliest snake in the world slithers along the ocean’s surface and dives deep into waters in search of prey. The sea snake’s venom is the most toxic of any snake - one drop can kill three people. In its underwater world, this serpent uses its poison to paralyze and kill victims, such as fish, before they can swim away.

Venom to the Max: This snake’s venom is up to ten times more potent than that of its closest land-dwelling relative, the cobra. Fortunately, sea snakes only bite humans if provoked, and they often don’t inject venom in defensive strikes.

Flat End: The sea snake’s tail is flattened on the end, like a paddle. This helps the aquatic reptile chase prey through the water.

Sea snakes often hunt through coral reefs at depths of 30 feet, but can dive to more than 160 feet. Either way, victims rarely stand a chance when this predator attacks. The snakes chase down prey or probe in reef crevices for hidden animals. Some sea snakes wait for prey in ambush. The yellow-bellied sea snake hides among debris near the surface. It stays motionless until a meal comes within striking distance. Then, zap - game over.

Long Lung: The most amazing of the sea snake’s adaptations to its aquatic life is a lung that stretches nearly the entire length of its body. When the lung is filled with air, the snake can stay underwater for up to three hours.

Pack-o-Snakes: Sea snakes usually swim alone, but on occasion they’ve been seen in groups of hundreds and even thousands. Scientists believe the snakes congregate as a fishing technique; the raft of snakes attract fish seeking shelter under what seems to be a mass of seaweed. 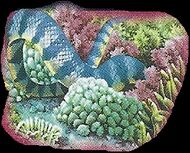 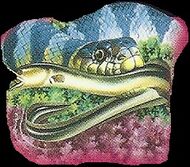 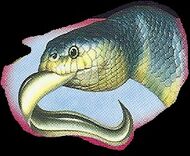 The sea snake is the most venomous snake in the world. Once the reptile sinks its small fangs into prey, the victim is dead in a flash.

Sea snakes travel in huge groups that can trail along for up to 50 miles.

+1 Attack Points against Monsters of the Deep
Community content is available under CC-BY-SA unless otherwise noted.
Advertisement