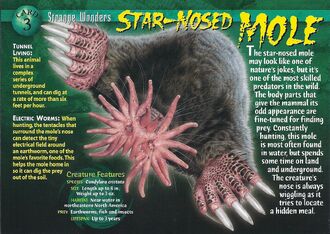 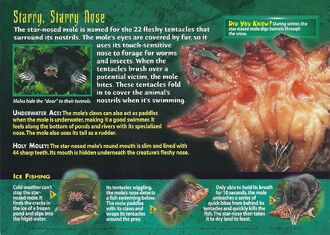 Near waters in northeastern North America

During winter, the Star-Nosed Mole digs tunnels through the snow

The Star-nosed mole may look like one of nature's jokes, but it's one one of the most skilled predators in the wild. The body parts that give the mammal its odd appearance are fine-tuned for finding prey. Constantly hunting, this mole is most often found in water but spends some time on land and underground. This creature's nose is constantly wiggling as it tries to locate a hidden meal.

Tunnel Living: This animal lives in a complex series of tunnels and can dig at a rate of more than six feet per hour.

Electric Worms: When hunting, the tentacles that surround the moles nose can detect any tiny electrical field around an earthworm, one of the mole's favorite foods. This helps the mole home in so it can dig the prey out of the soil.

The star-nosed mole is named for the 22 fleshy tentacles that surround its nostrils. The mole's eyes are covered by fur, so it uses its touch sensitive nose to forage for worms and insects. When the tentacles brush over a potential victim, the mole bites down. These tentacles fold in to cover the animals nostrils when its swimming.

Underwater Ace: The mole's claws can also act as paddles when the mole is underwater, making it a good swimmer. It feels along the bottom of ponds and rivers with its specialized nose. The mole also uses its tail as a rudder.

Holy Moley: The Star-nosed mole's round mouth is slim and lined with 44 sharp teeth. Its mouth is hidden underneath the creature's fleshy nose.