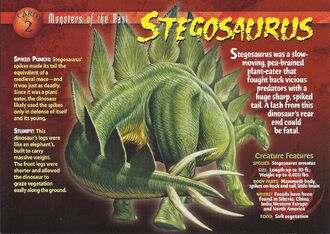 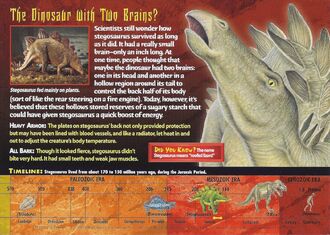 Fossils have been found in Siberia, China, India, Western Europe, and North America

Mammoth body, spikes on back and tail, little brain

Stegosaurus was a slow-moving, pea-brained plant-eater that fought back vicious predators with a huge sharp, spiked tail. A lash from this dinosaur's rear end could be fatal.

Spiked Punch: Stegosaurus' spikes made its tail the equivalent of a medieval mace - and it was just as deadly. Since it was a plant eater, the dinosaur likely used the spikes only in defense of itself and its young.

Stumpy: This dinosaur's legs were like an elephant's, built to carry massive weight. The front legs were shorter and allowed the dinosaur to graze vegetation easily along the ground.

The Dinosaur with Two Brains?

Scientists still wonder how Stegosaurus survived as long as it did. It had a really small brain - only an inch long. At one time, people thought that maybe the dinosaur had two brains: one in its head and another in a hollow region around its tail to control the back half of its body (sort of like the rear steering on a fire engine). Today, however, it's believed that these hollows stored reserves of a sugary starch that could have given Stegosaurus a quick boost of energy.

Heavy Armor: The plates on Stegosaurus' back not only provided protection but may have been lined with blood vessels, and like a radiator, let heat in and out to adjust the creature's body temperature.

All Bark: Though it looked fierce, Stegosaurus didn't bite very hard. It had small teeth and weak jaw muscles.

Stegosaurus lived from about 170 to 150 million years ago, during the Jurassic Period.

In terms of protection, this dino had it all. Even if a predator found a fleshy spot between its plates to bite into, the spiked tail whipped around to put an end to the attack.

Stegosaurus' massive body was about as big as a school bus.