Weird n' Wild Creatures Wiki
Register
Don't have an account?
Sign In
Advertisement
in: Monsters of the Past, Vertebrates, Reptiles,
and 24 more 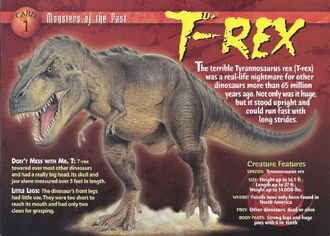 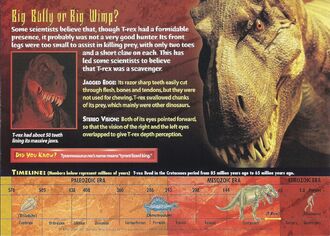 Fossils have only been found in North America

Other dinosaurs, dead or alive

Strong legs and huge jaws with 6 in. teeth

The terrible Tyrannosaurus rex (T-rex) was a real-life nightmare for other dinosaurs more than 65 million years ago. Not only was it huge, but it stood upright and could run fast with long strides.

Don't Mess with Mr. T: T-rex towered over most other dinosaurs and had a really big head. Its skull and jaw alone measured over 5 feet in length.

Little Legs: The dinosaur's front legs had little use. They were too short to reach its mouth and had only two claws for grasping.

Some scientists believe that, though T-rex had a formidable presence, it was probably not a very good hunter. Its front legs were too small to assist in killing prey, with only two toes and a short claw on each. This has led some scientists to believe that T-rex was a scavenger.

Jagged Edge: Its razor sharp teeth easily cut through flesh, bones and tendons, but they were not used for chewing. T-rex swallowed chunks of its prey, which mainly were other dinosaurs.

Stereo Vision: Both of its eyes pointed forward, so that the vision to the right and the left eyes overlapped to give T-rex depth perception.

Huge jaws and terrible teeth made T-rex the ultimate predator. It tore through any prey that crossed its path.

T-rex was able to bite with a force of 3,000 lbs. per tooth, that force would flatten a car.

+1 Defense points against Monsters of the Mind