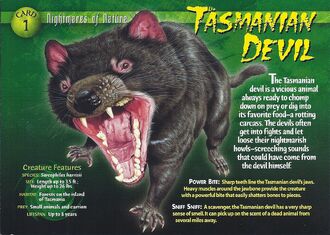 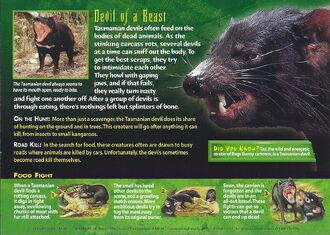 Forests on the island of Tasmania

Taz, the wild and energetic co-star of Bugs Bunny cartoons, is a Tasmanian devil.
The Tasmanian devil is a vicious animal always ready to chomp down on prey or dig into its favorite food - a rotting carcass. The devils often get into fights and let loose their nightmarish howls - screeching sounds that could have come from the devil himself.

Sniff Sniff: A scavenger, the Tasmanian devil has a very sharp sense of smell. It can pick up on the scent of a dead animal from several miles away.

Devil of a Beast

Tasmanian devils often feed on the bodies of dead animals. As the stinking carcass rots, several devils at a time can sniff out the body. To get the best scraps, they try to intimidate each other. They howl with gaping jaws, and if that fails, they really turn nasty and fight one another off. After a group of devils is through eating, there's nothings (sic) left but splinters of bone.

On the Hunt: More than just a scavenger, the Tasmanian Devil does its share of hunting on the ground and in trees. This creature will go after anything it can kill, from insects to small kangaroos.

Road Kill: In the search for food, these creatures often are drawn to busy roads where animals are killed by cars. Unfortunately, the devils sometimes become road kill themselves. 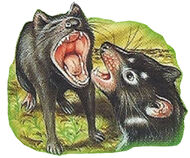 With horrifying screams, this beast's bark is as bad as its bite. Powerful jaws and grinding teeth leave nothing of victims but shredded bone.

A family of devils can devour an entire horse.