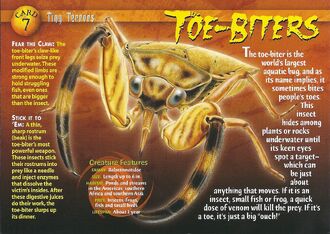 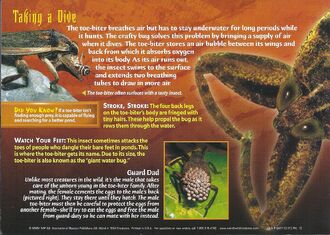 Ponds and streams in the Americas, southern Africa and southern Asia

If a toe-biter isn’t finding enough prey, it is capable of flying and searching for a better pond.

The toe-biter is the world’s largest aquatic bug, and as its name implies, it sometimes bites people’s toes. This insect hides among plants or rocks underwater until its keen eyes spot a target - which can be just about anything that moves. If it is an insect, small fish or frog, a quick dose of venom will kill the prey. If it’s a toe, it’s just a big “ouch!”

Fear the Claw: The toe-biter’s claw-like front legs seize prey underwater. These modified limbs are strong enough to hold struggling fish, even ones that are bigger than the insect.

Stick it to ‘Em: A thin, sharp rostrum (beak) is the toe-biter’s most powerful weapon. These insects stick their rostrums into prey like a needle and inject enzymes that dissolve the victim’s insides. After these digestive juices do their work, the toe-biter slurps up its dinner.

The toe-biter breathes air but has to stay underwater for long periods while it hunts. The crafty bug solves this problem by bringing a supply of air when it dives. The toe-biter stores an air bubble between its wings and back from which it absorbs oxygen into its body. As its air runs out, the insect swims to the surface and extends two breathing tubes to draw in more air.

Stroke, Stroke: The four back legs of the toe-biter’s body are fringed with tiny hairs. These help propel the bug as it rows them through the water.

Watch Your Feet: This insect sometimes attacks the toes of people who dangle their bare feet in ponds. This is where the toe-biter gets its name. Due to its size, the toe-biter is also known as the “giant water bug.”

Unlike most creatures in the wild, it’s the male that takes care of the unborn young in the toe-biter family. After mating, the female cements the eggs to the male’s back (pictured right). They stay there until they hatch. The male toe-biter must then be careful to protect the eggs from another female - she’ll try to eat the eggs and free the male from guard-duty so he can mate with her instead.