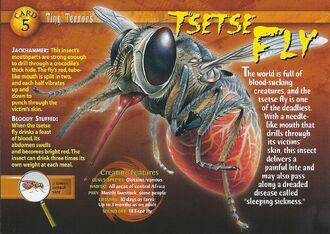 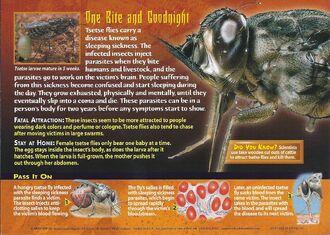 All areas of central Africa

Scientists use fake wooden cut outs of cattle to attract tsetse flies and kill them.

The world is full of blood-sucking creatures, and the tsetse fly is one of the deadliest. With a needle-like mouth that drills through its victims’ skin, this insect delivers a painful bite and may also pass along a dreaded disease called “sleeping sickness.”

Jackhammer: This insect’s mouthparts are strong enough to drill through a crocodile’s thick hide. The fly’s red, tube-like mouth is split in two, and each half vibrates up and down to punch through the victim’s skin.

Bloody Stuffed: When the tsetse fly drinks a feast of blood, its abdomen swells and becomes bright red. The insect can drink three times its own weight at each meal.

One Bite and Goodnight

Tsetse flies carry a disease known as sleeping sickness. The infected insects inject parasites when they bite humans and livestock, and the parasites go to work on the victim’s brain. People suffering from this sickness become confused and start sleeping during the day. They grow exhausted, physically and mentally, until they eventually slip into a coma and die. These parasites can be in a person’s body for two years before any symptoms start to show.

Fatal Attraction: These insects seem to be more attracted to people wearing dark colors and perfume or cologne. Tsetse flies also tend to chase after moving victims in large swarms.

Stay at Home: Female tsetse flies only bear one baby at a time. The egg stays inside the insect’s body, as does the larva after it hatches. When the larva is full-grown, the mother pushes it out through her abdomen.

The phrase “as harmless as a fly” doesn’t apply to the tsetse. This winged insect drinks blood for dinner, and carries a deadly surprise. Many of the tsetse fly’s victims are infected with the dreaded “sleeping sickness.”

This fly grows bacteria in its gut that gives it nutrients.
Community content is available under CC-BY-SA unless otherwise noted.
Advertisement