Weird n' Wild Creatures Wiki
Register
Don't have an account?
Sign In
Advertisement
in: Monsters of the Deep, Fish, Carnivores,
and 4 more 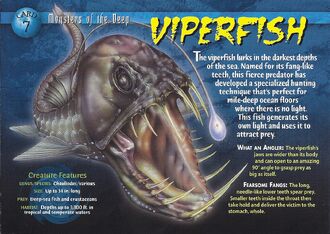 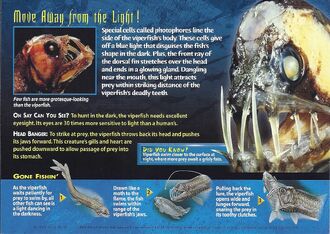 Depths up to 3,300 ft. in tropical and temperate waters

Viperfish swim closer to the surface at night, where more prey await a grisly fate.

The viperfish lurks in the darkest depths of the sea. Named for its fang-like teeth, this fierce predator has developed a specialized hunting technique that’s perfect for mile-deep ocean floors where there is no light. This fish generates its own light and uses it to attract prey.

What an Angler: The viperfish’s jaws are wider than its body and can open to an amazing 90° angle to grasp prey as big as itself.

Fearsome Fangs: The long, needle-like lower teeth spear prey. Smaller teeth inside the throat then take hold and deliver the victim to the stomach, whole.

Move Away from the Light!

Special cells called photophores line the side of the viperfish’s body. These cells give off a blue light that disguises the fish’s shape in the dark. Plus, the front ray of the dorsal fin stretches over the head and ends in a glowing gland. Dangling near the mouth, this light attracts prey within striking distance of the viperfish’s deadly teeth.

Oh Say Can You See?: To hunt in the dark, the viperfish needs excellent eyesight. Its eyes are 30 times more sensitive to light than a human’s.

Head Banger: To strike at prey, the viperfish throws back its head and pushes its jaws forward. This creature’s gills and heart are pushed downward to allow passage of prey into its stomach. 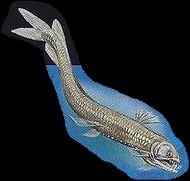 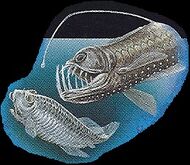 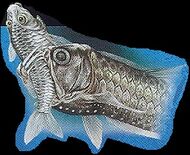 A lonely light in the deepest parts of the ocean shines from this deadly predator. Dangling in the dark, its glowing lure attracts victims to its needle-sharp fangs.

The viperfish’s teeth are so large the creature can’t close its mouth.
Community content is available under CC-BY-SA unless otherwise noted.
Advertisement